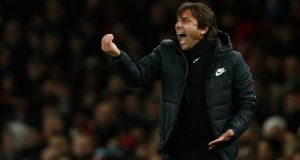 Antonio Conte has said that José Mourinho is acting like he has “demenza senile”, launching a fierce attack on his rival at Manchester United. There is no love lost between the pair and the Chelsea manager felt his patience snap after hearing comments from Mourinho on Thursday.

Mourinho said that he did not need to “behave as a clown on the touchline” to prove his passion for his role at United – which was interpreted as an attack on Conte, who is well known for his touchline histrionics.

Conte certainly took it that way and he bit back strongly, reminding Mourinho that he could be similarly animated on the touchline during his younger days. Mourinho famously ran along the Old Trafford touchline in 2004 to celebrate his Porto team’s Champions League winner against United.

Conte lapsed into his native Italian to explain himself – the phrase he used translates into English as senile dementia, although Chelsea insisted he meant to say amnesia.

He was in combative mood, to say the least, and he also turned his fire on Arsène Wenger, who had said earlier on Friday that Eden Hazard, the Chelsea forward, ought to have been booked for diving in the 2-2 draw at Arsenal on Wednesday night. Instead, Hazard won a penalty from which he scored.

“I think if Arsène Wenger watched the game again, [he should]understand that he was very lucky during the game for refereeing decisions,” Conte said. He would also reference Arsenal’s luck with refereeing decisions in last season’s FA Cup final. Arsenal beat Chelsea 2-1 and Alexis Sánchez’s opening goal followed a handball by him.

Conte was asked whether it irritated him when rival managers talked about him or his players. “It is very strange,” he replied. “Because I don’t like to speak about the other coaches, the other players. I think that is a form of respect you must have and, I repeat, sometimes, for example, Wenger forgets that in our last few games [against Arsenal], we finish the game with 10 men. When they won the FA Cup and Community Shield, I think the referee decisions were a bit strange, you understand?

“I can talk, if I want, about referee decisions for one month but I don’t want to do this because we must have respect for the decision. Also, Wenger try to find this way like other coaches and it is not good. You have to accept the decision. He is an old coach, he has experience, he won a lot and he has to continue to do what he did in the past.

That was an obvious reference to Mourinho, who has twice managed Chelsea. There is a theory that he feels jealousy towards Conte who, like him, has taken Chelsea to the Premier League title. – Guardian service