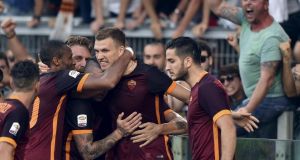 AS Roma’s Edin Dzeko celebrates with his team mates after scoring against Juventus. Photograph: Alberto Lingria/Reuters

Roma picked up their first win of the new season on Sunday at the Stadio Olimpico with a 2-1 victory over 10-man Juventus to send the defending champions crashing to a second straight defeat.

Miralem Pjanic, denied by the post in the opening half, gave the hosts a deserved lead with a powerful free-kick in the 61st minute.

After Juve had Patrice Evra sent off for a second yellow card with 12 minutes remaining, Roma made them pay seconds later when Manchester City’s on-loan striker Edin Dzeko headed in Iago Falque’s cross for his first Serie A goal.

Paulo Dybala reduced the arrears with three minutes remaining but Juve did not find the equaliser despite having chances to do so.

Juve had suffered a surprise 1-0 setback at home to Udinese in their Serie A opener last week while Roma, who finished a distant second to the Turin giants last season, were held to a 1-1 draw at Hellas Verona.

The Romans dominated Sunday’s game from start to finish with Juve failing to test Roma keeper Wojciech Szczesny until late in the match.

The two played together for the first time since joining Juve this summer.

Roma started well. In the opening minute, the Giallorossi appealed for a penalty after Alessandro Florenzi fell in the box following contact from Mandzukic but the referee waved play on.

Keita and Lago Falque then saw their attempts go wide.

Pjanic wasted a good chance for the hosts in the 17th minute when he got behind Giorgio Chiellini’s clearance but his right-footed volley from the edge of the area was off target.

Roma kept up the pressure and were unlucky not to break the deadlock in the 24th minute.

Juve struggled to put a good move together and in the 39th minute, Pjanic’s central free-kick was saved by Buffon in the last chance of the opening half.

Early in the second half, Martin Caceres tried his luck from outside the area but his effort flew high and wide.

In the 57th minute, Pjanic could have made it 1-0 for Roma when he got behind Edin Dzeko’s pass but his left-footed shot from the heart of the area lacked pace and was saved by Buffon.

Buffon was called again three minutes later to clear Dzeko’s shot towards the near post.

Roma’s efforts were then rewarded.

Buffon could do nothing to stop Pjanic’s right-footed free-kick from sailing into the top left corner of goal.

In the 66th minute, Juve had their third-choice goalkeeper Rubinho sent off from the bench for dissent.

Roma kept up the pressure and in the 71st minute, Radja Nainggolan warmed the hands of Buffon with a stinging drive from 30 yards.

Juve suffered a huge setback when Evra was handed his marching orders after a late challenge on Juan Manuel Iturbe.

Roma doubled their lead seconds later when Dzeko got past his Chiellini to nod the ball past a helpless Buffon.

Juve pulled one back when substitute Roberto Pereyra set up Dybala in the box and his diagonal shot beat Szczesny.

Seconds from time Leonardo Bonucci’s header from Dybala’s cross forced Szczesny into a full-stretch save as the hosts held on for a deserved three points.