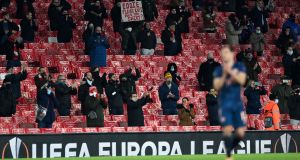 Arsenal fans during their team’s win against Rapid Vienna at the Emirates Stadium. Photograph: EPA

Arsenal’s fans had waited nine long months to return to the club’s north London stadium but the 2,000 people sprinkled across the red seats had to wait only nine minutes to enjoy the thrill of celebrating a goal in the flesh on Thursday.

Appropriately, it was Frenchman Alexandre Lacazette who struck the opener in a 4-1 victory against Rapid Vienna - the same player who 272 days earlier had scored the winner against West Ham United, days before the Covid-19 pandemic swept in.

After a three-month hiatus, English soccer cranked back into action in June, but the country’s gleaming Premier League stadiums have since been eerily silent and sad places on match days -stripped of atmosphere.

With the capital placed in the government’s Tier Two restrictions following the end of national lockdown, Arsenal were the first top-flight club to have the opportunity to open the turnstiles to a limited number of fans.

Further goals by Pablo Mari and Eddie Nketiah raised the decibel levels, before Koya Kitagawa pulled one back for Vienna just after the break. But the fans were on their feet again when Emile Smith Rowe rounded off a comfortable Arsenal win.

Tottenham secured their passage into the Europa League knockout stage with a game to spare, but only after an off-colour showing in a 3-3 draw away to LASK in Group J.

Penalties from Gareth Bale and substitute Dele Alli sandwiched Son Heung-min’s 12th strike of the season on a difficult night for Spurs in Austria.

The hosts were worthy of a point while questions could be asked of one-time England goalkeeper Joe Hart for two of the LASK goals.

He could do nothing about Mamoudou Karamoko’s wonderful equaliser in the third minute of added time at the end of the contest — and despite drama aplenty, Jose Mourinho’s side did enough and can now focus on Sunday’s derby with Arsenal.

Injuries meant forwards Harry Kane and Carlos Vinicius were absent at Linzer Stadion and Tottenham’s manager picked three players from last weekend’s stalemate at Chelsea. Victory at home to Royal Antwerp next Thursday will ensure they progress in top spot.

Leicester have work to do in their final game if they are to win their Europa League group after a much-changed side were beaten 1-0 by Zorya Luhansk in Ukraine.

Substitute Allahyar Sayyadmanesh scored six minutes from time to inflict a first defeat on the Foxes in the competition. They remain top of Group G thanks to their head-to-head record against Braga and will finish first if they win at home to AEK Athens in their final group game.

However, a cause for concern for boss Brendan Rodgers will be the injury that forced off Caglar Soyuncu just 16 minutes into his return, following a six-week absence with a groin problem.

Rodgers made nine changes to his team, with James Justin and Dennis Praet the only survivors from the Premier League defeat to Fulham on Monday. The likes of Jonny Evans, Youri Tielemans, Jamie Vardy and Kasper Schmeichel were all left at home and rested.

Rangers overcame their stiffest examination yet as they booked their place in the last 32 of the Europa League with a 3-2 win over Standard Liege.

Steven Gerrard — who was overseeing his 40th Europa League game in charge of the club — has now masterminded progression to the group stages for the second year running. But it was far from plain sailing as Philippe Montanier’s men gave the unbeaten Ibrox outfit their most testing 90 minutes of the season so far.

They twice led after Maxime Lestienne and Duje Cop struck either side of Connor Goldson’s equaliser. But Rangers claimed the win they needed thanks to James Tavernier’s penalty and Scott Arfield’s second-half winner.