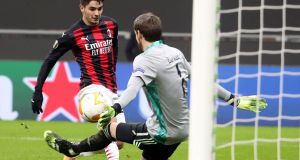 Almost 14 years have passed since Kaká swaggered past Neil Lennon when en route to an extra-time winner in the San Siro to curtail Celtic’s Champions League involvement at the last-16 stage. These were heady days for the Hoops, when mixing it with Europe’s elite seemed a seasonal formality. Lennon can laugh now about Kaká’s brilliance, by which point the Celtic midfielder had run out of steam.

Lennon the manager returned to face Milan when featuring in an altogether different movie. A League Cup defeat to Ross County intensified already fierce criticism of the Northern Irishman, whose Celtic team had been eliminated from the Europa League long before another joust in Italy. As Lennon’s team raced two goals ahead, the notion of unlikely salvation was a live one. The players were making the case for why their manager’s race might not necessarily be run.

Milan, minus Zlatan Ibrahimovic, gave Celtic a two-goal start, but still emerged pretty comfortable victors. Celtic’s error-prone defence has been breached 17 times in five group fixtures. Milan have no such worries; they have now qualified for the knock-out phase.

Within 14 minutes Celtic had seemingly dismissed any sense of a comfortable evening for the Serie A leaders. Tom Rogic capitalised on the inability of Rade Krunic to control a pass from Gianluigi Donnarumma before slamming a low shot beyond Milan’s highly-rated goalkeeper. As Rogic curled wide moments later, the home side’s sluggishness was glaring.

Callum McGregor should have doubled Celtic’s advantage from eight yards, with Donnarumma instead able to bat away the midfielder’s tame shot. Odsonne Édouard soon spared McGregor’s blushes with a dinked finish from Ryan Christie’s pass. Celtic, who entered this fixture amid a run of just two wins in 10 outings, were entitled to be shocked at being two goals in front.

The scale of Celtic’s recent defensive trouble has been such that concession of at least one goal in the San Siro was inevitable. Still, Lennon has cause for immense frustration about the circumstances in which Milan hauled themselves back into the game. Christie’s rash foul on Ante Rebic afforded Hakan Calhanoglu a central free-kick opportunity from 20 yards. As the Celtic goalkeeper, Vasilis Barkas, took one step right, Calhanoglu whipped his shot in the opposite direction and into the net.

Milan’s next attack restored parity. This was to prove another defensive disaster as Jens Petter Hauge’s cut-back wasn’t dealt with by a clutch of visiting players. Samu Castillejo pounced to deliver a high finish which left Barkas helpless. Celtic spent the closing stages of the first half under pressure but when seeking small mercies, without conceding a third.

It took just four minutes of the second period for precisely that to arrive. Hauge weaved and bobbed his way infield from the left flank, with Celtic’s defenders not at all forceful about stopping the Norwegian. His low, curling shot was a delight.

It appeared both teams were content to settle for their lot until the Milan substitute Brahim Díaz added a fourth, the outstanding Hauge this time the creator. For Lennon, Sunday’s meeting with St Johnstone was always the more significant fixture. How times have changed. - Guardian