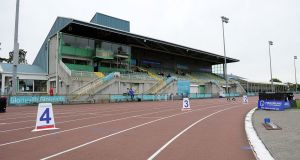 Dublin County claim Morton stadium’s management had agreed a deal to allow the club play at the ground for the coming season. File photograph: Inpho

Dublin County have laid the blame for their failure to obtain a First Division licence last week firmly at the door of Morton stadium’s management, Sport Ireland Facilities, which it claims reneged on a deal to allow the club play at the ground for the coming season at the very last minute.

On Monday evening the club’s leading figure, Dennis Lukens, told The Irish Times that he would consult with his legal advisors as to whether there is a basis to pursue the matter but he described the organisation’s behaviour as “absolutely unacceptable and unprofessional”.

In earlier posts on social media the club said that having agreed a “legally binding” deal and come through all of the required FAI inspections, they were confident last Friday morning that they would be granted the licence they needed to pursue their application for membership of the league at a meeting that was due to be held at 4.30pm.

At 2.43pm, they say, however, “Sport Ireland Facilities emailed us. The email said Morton Stadium will not be available for your club.

The Sports Facilities people did not respond to a request from The Irish Times for a comment.

In a bid to salvage their application, Dublin County’s locally based representative, Philip Nolan, contacted Home Farm about the possibility of renting Whitehall for the coming season. The club called a management committee meeting for Saturday morning and though officials at the club suggest a final decision had not been reached, Nolan believes he had a deal.

“The Home Farm people were brilliant,” he says. “Within 24 hours, by 3pm on Saturday, we had an agreement but it was too late for the licensing meeting and a couple of hours later, the FAI announced that it was going with Treaty United in a 10 team league.

“The whole thing with the stadium completely killed us. I said that to them but I was told that everyone wanted to use the track in the build up to the Olympics. I asked them, ‘could they not have told us that before?’”

It is far from clear whether Dublin County would have actually been accepted into the league even if they had successfully obtained the licence but it is certainly possible, not least because it would have avoided the association having to take the decision to exclude Shamrock Rovers’ development team.

Lukens feels that he has no real complaints about the way the FAI handled the situation but, of those in charge of the stadium he says: “All licensing boxes were ticked, thousands of euro invested, two professionals working full-time for two months on the process, a partnership with a leading youth club, 20 people signed contracts to be part of the club’s operation and they do this? At 2.43pm in the afternoon?”

He suggested, however, that he might be back. “We of Irish descent don’t give up easy. I am proud to be Irish and I believe in Irish soccer and the League of Ireland. Still.”