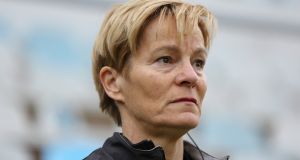 Vera Pauw: hoping to guide the Republic of Ireland women’s squad to the finals of a major tournament for the first time. Photograph: Filip Filipovic/Inpho

Vera Pauw remains confident that she can guide Ireland to the 2023 World Cup after signing a new contract with the FAI to oversee the women’s national team until after the tournament.

The former Dutch international says that an improving group of players, greater awareness of the standards required in training among Airtricity League clubs and improved management structures around the international set-up itself are all causes for optimism although she accepts that Ireland could do with avoiding the Germanys of the world when the qualifying draw is made in April.

“There are 11 countries qualifying [from Uefa’s section of the competition] plus one playoff place,” she says. “That means a maximum of 12, whereas the European Championships is 16. So, in that sense it’s already more difficult.

“But on the other hand we need to wait for the draw. Because the draw that we had last time was Germany which meant there was virtually no chance [of automatic qualification] while the play off place was between Ireland and only one opponent. It’s really down to a very unfortunate game away.

“So, we need to wait for the draw because it could turn out that even though we have four teams less, it becomes easier than the European Championship for us to go to the World Cup.”

Pauw, whose two assistants, Eileen Gleeson and Jan Willem van Ede, are both also to extend their deals, will look to four friendly games in April and June against as yet unconfirmed opponents, to prepare her squad for the new campaign which is scheduled to get under way in September.

The intention, she says, is to line up a mix of stronger opponents and teams of the much the same level so as to test existing players and give opportunities to those who have been on the margins.

She suggested, however, that she currently sees Reading’s Grace Molony as having taken possession of the goalkeeper’s jersey after having done well in what was her competitive debut against the Germans in December.

The position has been a problem one for a while but the current coach said of the 27-year-old, who might have felt her club form had merited opportunities earlier in the campaign: “We were very pleased with her performance, it was exceptional and the moment somebody steps up like that, that’s a new standard.”

Despite almost all of the team’s more regular starters being based overseas, Pauw insists that the international side’s long term fortunes are rooted firmly in the Women’s National League which will bring through young talent and, she hopes, get to the stage where it better equips players to deal with the challenges of playing for Ireland.

“I’m not saying that I don’t want the players to play at the highest level possible [but] what for me is important is the quality that the players are showing. Look at Áine O’Gorman, she isn’t playing abroad but she is in the line-up.

“But they [the majority of players based here] don’t train enough, they simply don’t train enough to be able to face a Germany or England or the Netherlands or France, where all the players are training every day.

“So we need to create a situation for the players to train every day at a high level and not have to go into a gym for some kind of stability program and think that that is the same as training at football.”

Pauw is encouraging the better players to train with men at least once a week so they are challenged more and says that the association has overcome insurance issues that previously prevented them from doing this with players from other clubs.

Her hope, she says however, is that senior women’s teams will become more integrated into the men’s League of Ireland clubs where they can become part of “a top elite sports programme on a daily basis”.