Ken Early: Erling Haaland is not the type of superstar we are used to 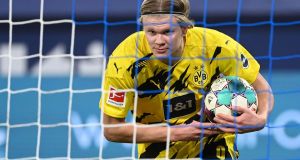 Dortmund’s Erling Haaland: There is an almost unnerving simplicity to the way he scores many of his goals. Photograph: Fassbender/AFP via Getty Images

The debate over whether Tom Brady is the greatest American football player of all time is of interest only to fans of American football, but Brady’s ability to win the Super Bowl at the age of 43 must fascinate sportspeople everywhere.

He has proved that, at least for a tiny uber-elite class of athletes, career death need not occur in the early 30s, as it used to do even for the greats and as it still does for most of the normal ones.

The wealthiest and most important stars can now dream of playing into their 40s, guided by fitness gurus adept in the latest techniques of recovery and nutrition, and playing increasingly specialised and limited roles in teams that have been specifically tailored to cover for their weaknesses, like a brain transplanted into a robotic exoskeleton.

The aging superstar knows that the passage of time has imposed obvious and absolute limits, like a vampire who stays beautiful but can never go out in the sunshine. The exquisite posture of Zlatan Ibrahimovic can’t hide just how slowly he is parading about in front of his young Milan team-mates. The lordly bearing of late-career Cristiano Ronaldo can’t quite compensate for those stiffening knees.

But teams are willing to accommodate these non-running legends because they are deemed to carry a significance that transcends mere tactical or technical considerations, whether that be cultural and commercial clout, or just some indefinable quality of Winningness.

Still, nothing beats being able to do your own running when the situation calls for it. Romelu Lukaku demonstrated as much in Milan’s weekend derby when he burst through from half way to score Inter’s third in a 3-0 win. Lukaku’s celebration showed that this 301st goal of his career meant more to him than most of the others. It sealed a decisive personal victory for him over Ibrahimovic after they were involved in a hostile confrontation in a cup match last month.

The match director quickly cut to the Ibrahimovic reaction shot. The great Zlatan was seen stony-faced, clapping his hands. This was interpreted by the Premier Sports commentator as Ibrahimovic showing his class by magnanimously applauding his rival, when it seemed much more likely he was going through the motions of encouraging his defeated team-mates. “Come on, lads.” But that’s how it is when you get to Zlatan’s level. Even when you lose, you win.

Can Lukaku ever ascend to the level of Zlatan or Ronaldo? He still has to do a couple of things. First, he has to increase his scoring rate from one in two to more than two in three, which is now the minimum standard for those who want to be considered among the very best strikers.

Even then he might be a bit too obviously self-doubting. Nothing is less iconic than self-doubt. When Messi was at his best it was as though the concept of self-doubt hadn’t occurred to him. Ronaldo and Ibrahimovic seemed more obviously aware of the possibility of failure, but most of the time they had the bravado to suppress those feelings.

The other thing Lukaku has to do is play more regularly in the Champions League. He has made only 27 appearances in the competition in his 27 years, scoring 13 goals. He has already been left behind by the greats of the coming generation: Kylian Mbappe and Erling Haaland.

Mbappé is made in the classic image of a great footballer. Everything looks right, looks easy, everything flows. There’s something reassuringly familiar about his brilliance, maybe because of his resemblance to the original Ronaldo – it’s as though the Brazilian’s genius has been reincarnated. Maybe now we’ll get to see what he could have done if he hadn’t got injured.

Haaland, by contrast, is new and strange, a type of player we’ve never seen before. Six-foot four-inch 20-year-olds used to be skinny and underpowered. Haaland, a product of modern conditioning, has a sprinter’s speed and explosive power and is capable of running at 36k/ph while hunched forward almost 90 degrees at the hip.

Twenty-year-olds used to be shy and gauche, but Haaland conducts interviews with the cool, mocking, pugnacious self-confidence of someone to whom Zlatan seems an old-fashioned figure of almost courtly politesse.

He has grown up watching Ronaldo and Messi making it seem normal to score more than a goal per game, and so he is scoring more than a goal a game as though nothing could be more normal: 25 goals in 22 league and European games for Dortmund.

It’s difficult to understand how he is doing it. When you look at his statistics the surprising thing is just how ordinary Haaland looks in many aspects of the game.

According to fbref.com, Haaland touches the ball fewer times per game than 90 per cent of forwards in the big five leagues. He attempts fewer passes per game than three-quarters of these forwards.

Most confusingly of all, he is conspicuously bad at receiving the ball. You can’t do much if you can’t get on the ball and receiving passes is one area in which the best attacking players usually stand out: Messi, Ronaldo, Ibrahimovic, Neymar and Mbappe are all 95th percentile or above.

Haaland is in the 11th percentile, meaning he receives fewer passes per game than almost 90 per cent of his big-league peers despite playing for one of Germany’s most dominant possession sides.

There is only one thing at which Haaland is better than almost everybody, and that is lashing the ball into the net from almost any angle.

His goal for Dortmund against Schalke on Saturday was a typical example: a hopeful ball into the box, an unpromising angle, a tussling defender, then the ball flashing into the net before anyone knows what has happened with a swing of that long left leg.

There is an almost unnerving simplicity to the way he scores many of his goals. He bustles past defenders into the danger area as though he has no doubt about where the ball is going to arrive. There is no big five leagues database for absence of self-doubt but it’s obvious that Haaland would rank in the 99th percentile.

Already we can see that Mbappe and Haaland are being positioned as the successors to Messi and Ronaldo, the great rival stars of the coming era of football, and yet there’s really no comparison between them in terms of what we traditionally understand as football ability.

Mbappe is better than Haaland at almost everything: touch, passing, dribbling, involvement in the game. At this moment Haaland has a tiny edge in that one crucial area of lashing the ball into the net.

If one day in the future we’re looking back on this apparent mismatch as an era-defining rivalry, Haaland will have pulled off one of the great feats of mind over matter in the history of the game.