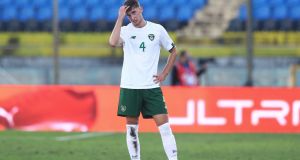 Ireland under-21 international Conor Masterson could miss the rest of the season with Swindon Town after picking up a hamstring injury. Photograph: Matteo Ciambelli/Inpho

Republic of Ireland under-21 international Conor Masterson is in danger of missing the rest of the season after a hamstring injury he picked up in a recent league game for Swindon proved to be more serious than had initially been believed by the club.

Masterson, who is on loan to the League One side from QPR, who he had joined from Liverpool in the summer of 2019, picked up the injury just before half-time in the game against Shrewsbury Town last Saturday week.

Swindon boss John Sheridan has now confirmed, however, that “Conor has a long-term injury. Our physio is liaising with QPR to see what is the best course of action for his recovery and treatment”.

“We’ll do what’s best and what’s right for the lad, but he’s got quite a serious injury. I wouldn’t like to say whether we’ve seen the last of him, but it’s looking likely that he’ll miss about 10-12 weeks.”

Masterson had been getting a good deal of playing time since joining Swindon last month, with the 22-year-old central defender starting five games in recent weeks. He had been playing in front of Irish goalkeeper Mark Travers but his loan spell was cut short by Bournemouth last week due to injury problems and the 21-year-old, who made eight appearances for Swindon, was back on the bench for the Championship game against Nottingham Forest over the weekend.

James McGrath, meanwhile, could return to the St Mirren side much more quickly than had been initially anticipated after he dislocated his shoulder in the defeat by Celtic last week. The midfielder, who has been in good form for the Scottish side, is expected to require surgery but manager Jim Goodwin says that after Jake Doyle-Hayes picked up an injury against Aberdeen over the weekend, he will speak with McGrath about the delaying any operation.

“We got the results back from that on Friday,” says Goodwin, from Waterford, who signed a new three-year deal with St Mirren on Monday. “And we will sit down with him to see if there is a possibility we can maybe manage that until the end of the season.

“It probably will need surgery but we will try and hold it off for the next few weeks. It would be great to secure that top six in the next month and then we could go and get Jamie operated on.”

The club are awaiting clarification of the scale of Doyle-Hayes’s injury but Goodwin did not seem hopeful about his fellow Irishman.

“Jake’s one doesn’t look good at all. He went up for a header and landed awkwardly and he has left on crutches. It looks to be a problem with his heel. Worst case scenario it could be a stress fracture and that would suggest it will be a serious one.”

2 Swimming in the planet’s deepest, darkest waters is where Nuala Moore feels most alive