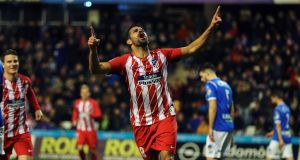 Diego Costa had only been back for five minutes when he scored his first Atletico Madrid goal in three and a half years, but no sooner had he started than he stopped again. As the fans in red and white behind the goal celebrated, Costa sat on the turf, looking at his right leg.

He had stretched to turn the ball into the net and paid for it. The game – his first for almost eight months – kicked off again with his side now 3-0 up as he limped round the touchline with the doctor and the fitness coach Oscar ‘El Profe’ Ortega, yet he was not going to be beaten. He had waited too long to give up. So, Costa slowed by the bench, showed Diego Simone his shin and ran on again.

His number was not up after all. Barely five minutes before, it had been. It was 8.17pm when they called him over, the wait finally at an end. Costa pulled off his tracksuit to reveal the 18 below, knelt down, crossed himself and headed to the touchline, high-fived Angel Correa and made his way into a match for the first time in 221 days, pointing to the sky. Chants of “independence” were interrupted by the cheers from the Atletico fans, while supporters of Lleida Esportiu whistled and booed.

Not long after he reappeared, knock on the shin forgotten, there was a confrontation with Jorge Felix and the referee intervened. “We know what he brings us,” Simeone said before the game, beginning his description with “aggression”.

They had missed him; as for Costa, he had missed playing, his way. Simeone has wanted Costa back virtually from the day he left and time only deepened the longing. Mario Mandzukic, Jackson Martinez, Fernando Torres, Kevin Gameiro, Angel Correa and Luciano Vietto all arrived, others were pursued, Alvaro Morata and Edinson Cavani among them, but the only replacement for Diego Costa was Diego Costa.

This was his first game since May 2017 and his first for Atletico since May 2014. At 13,500, the Camp d’Esports is among the biggest stadiums at this level in Spain, a modern, municipal arena with colourful club badges adorning the corner flags, like lollipops on sticks, a club shop selling shirts but no mugs, and it was not far off a sell-out.

Yet it is not the Stadium of Light, where he last played for Atletico, or Wembley, his final game for Chelsea, and this Copa del Rey last-16 first leg against Lleida Esportiu from Spain’s 80-team, four-group, theoretically amateur third tier was no European Cup or FA Cup final either.

Nor was there any drama, or so it seemed. Atletico were 2-0 up when he came on and after his goal, Antoine Griezmann got a fourth from a deflected free-kick in the last minute.

Costa finally arrived in Madrid in September for €65 million, not only four months since his last match but also since any meaningful activity at all. He knew what awaited and it was terrifying: Ortega has a reputation for a sadistic streak. “He’ll soon get me into shape,” Costa said, wearing a big grin and a bit of a belly. He trained, regularly boxed in a gym owned by Fernando Torres and lost 8kg. Now at last here he was.

“Play!” said the front cover of the sports newspaper Marca. At half-time he was out there warming up with Griezmann, the partnership that promises – at least until the Frenchman’s inevitable departure – and 17 minutes into the second half he was on.

Costa had watched from the bench as Diego Godin headed in the first from a dead ball – something things never change, he might have thought – and Torres made it 2-0. He did not have long but it was enough to score, walk off and walk back on again, for good. – Guardian service