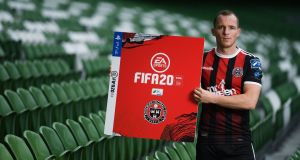 If by some strange fluke, you find yourself in the lift of the AIB treasury section over the next few days and things seem a little tense, don’t worry about, it’s always that way in a Dublin derby week.

Bohemians captain Derek Pender will be up and down in the thing a few times on Friday before the game at Dalymount Park and he knows the score well enough at this stage.

“There are loads of Rovers fans around the bank, and Bohs fans,” he says at the launch of the EA Sports Fifa 20 SSE Airtricity League Premier Division Club Packs. “I don’t even know them. I try to keep to myself in the bank, but sometimes in the canteen someone in a Bohs jersey will just walk up to you or you get in the lift one day and there’ll be someone in a Rovers jersey and they’re just staring at you.

“It’s just normal though, isn’t it,” he says with a laugh.

The fact that Pender will put in a shift before heading to the game says something about the differences between the two clubs: one full of young, inexperienced and part-time players, the other more high profile and almost fully professional. The Bohemians skipper, a key figure at 34-year-old in a team that can include its share of kids, could take game days off to focus on his football but says he prefers the distraction.

“If I wanted the day off I could ask and try book it because it’s such a big day but I don’t,” he says, while apparently doing a sponsored media gig in something like an extended lunch break.

“I like going to work because I don’t have to think about it all day. If I’m sitting at home all day… I’m just so used to working on the day. Last year we were playing to get into the semi-finals of the cup, up in Derry, so we travelled up the day before and had the day of the game off and my head was wrecked. I had a headache going into the game.”

The extra attention this year, he feels, is a sign of the way in which the games against Rovers have become that little bit more special again in recent years. The needle never went out of the tie but with crowds on the rise again and Keith Long’s side developing something of a knack for putting one over on their Southside rivals, things have certainly heated up over the past couple of campaigns.

“They’re great occasions, the derbies,” he says. “In the last three or four years they’ve have been unbelievable. We never really went on about the run; that’s for the fans really to go on about it but it was great against a team like Shamrock Rovers to win that many games in a row (seven victories, eight without defeat until the finally lost a league game in August). But we didn’t really look at it like that: every game against them is a new game.”

This one is special because the FAI Cup represents the only hope either side has of silverware this season and while there may be a little more pressure on the visitors to produce something to show for this season, being deprived of even the day out at November’s final by bitter rivals will not play especially well for anyone.

Pender and quite a few of his teammates know all about losing out at this stage already with Bohemians having been beaten by Cork City in a semi-final replay last season.

“The disappointment is still there,” he says. “You think about the game in Dalymount when we were so close and then we concede a peno and then how we went out down in Turner’s Cross. Hopefully we can get that little bit of luck this week and Friday because you need that little bit of luck in the cup especially when you’re playing a team as good as Shamrock Rovers.

“There is big pressure on them with the budget they have and what they’ve put into it with the investment but I don’t think they (the players) will be think they’ll be thinking about losing the league going into Friday. It’s a big game and they’ll be looking forward to it.”

They won’t be the only ones.

1 Gordon D’Arcy: If Farrell can tap into our self-worth, we’re all on a winner
2 Winds of change as Ireland name a refreshed team, picked on form
3 Who is Caelan Doris? Meet Ireland’s newest rugby star
4 Nike Vaporflys won’t be banned but regulations will tighten
5 ‘Out-dated, outmoded, and turning people off’: Niall Moyna on championship
Real news has value SUBSCRIBE
Crossword Get access to over 6,000 interactive crosswords