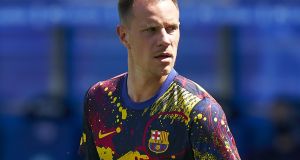 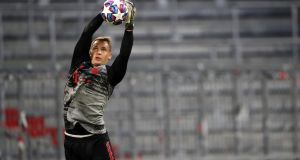 Manuel Neuer: Bayern Munich goalkeeper is still German number one ahead of his rival for the position, Marc Andre Ter Stegen. Photograph: A. Hassenstein/Getty Images

“Germany is fortunate to have this pair of goalkeepers, although Neuer is truly world-class and Ter Stegen is still on his way to that level.”

The flickering rivalry between Manuel Neuer and Marc-André ter Stegen didn’t really need stoking before the pair meet in Friday’s Champions League quarter-final between Bayern Munich and Barcelona, but Karl-Heinz Rummenigge thought he might as well give it a poke anyway.

Neuer’s Bayern teammate Leon Goretzka took a more reasonable stance, but at the same time trod a very thin line when tactfully describing the pair as “the best two goalkeepers in the world”.

Choosing your corner is important. Portugal players, for example, have rarely dared veer from the “Cristiano is the greatest” party line over the years. If we’re not quite at the level of delicacy yet, it’s not far off.

Rummenigge’s old sparring partner Uli Hoeness, Bayern’s now former president, remember, threatened to “no longer release players for the national team” if Ter Stegen supplanted Neuer as Germany’s No 1, although he rowed back on the comments a few days later.

In reality, few would paint Neuer as hard done by, retaining his place for Germany’s shambolic 2018 World Cup despite having not played since the previous September, and despite Ter Stegen’s excellent form for Barcelona.

If we go back to the dawn of this long Champions League season, it all escalated with Ter Stegen biting back at what he seemed to see as an attempt by his senior colleague to put him in his place.

As is often the case in pre-match press conferences in the competition when a visiting player speaks the language of the host team, Ter Stegen was put forward alongside Ernesto Valverde on the eve of Barça’s opening group stage match, at Borussia Dortmund in September.

It followed an international break in which Ter Stegen described it as “tough” to be left on the bench against the Netherlands and Northern Ireland, while Neuer subsequently told Sky Germany that “it doesn’t help” for his deputy to vent his frustrations.

“We have Kevin Trapp and Bernd Leno, other great goalkeepers who also want to play and are on the bench.”

Sitting beside his coach in Signal Iduna Park a day later, Ter Stegen had no intention of ducking the issue.

“I don’t think it’s up to Manuel to express an opinion on my feelings,” he retorted. The following day he gave an outstanding performance, making a number of impressive saves and stopping a penalty from his former Borussia Mönchengladbach teammate Marco Reus to salvage a point for his off-colour side.

Those familiar with Ter Stegen already knew him as a strong character, and always comfortable fighting his own corner. He is doing so at the moment in terms of a new contract, with his current one due to expire in 2022 and having seen various Barcelona teammates receive lucrative deals, he will stand his ground. He knows that he is arguably Barça’s most important player not named Lionel Messi.

Neuer, six years Ter Stegen’s senior, is on the other side of a similar stand-off and he and Bayern went into the hiatus poles apart both in terms of level of salary and length of contract, with his old deal expiring in 2021. Yet three days after Bayern were back in Bundesliga action against Union Berlin in May, they announced an extension to 2023 – maybe with the pandemic prompting everyone involved to regain some perspective, and just maybe following the alarming form of Alexander Nübel, signed in January for next season from Schalke.

One has to wonder if, in Lisbon, the cards are stacked too heftily in Ter Stegen’s favour in terms of direct comparison. There is no disputing the German champions’ advantage ahead of the match. Bayern have been largely unstoppable under Hansi Flick and literally unstoppable since returning from the shutdown.

They arrive in Portugal on an incredible run of 19 successive wins, having soared to a Bundesliga/DfB Pokal double on the way, in stark contrast to Barcelona’s recent months of unrest behind the scenes, stodgy football and loss of their title.

Even if Neuer must assume the task of defying the great Messi in Estádio da Luz, the strong suspicion is that he’ll have a quieter night than Ter Stegen. That won’t be a situation to which the latter is unaccustomed. He has saved Barça time and again over the last two campaigns, particularly away from the Camp Nou.

While Neuer has never quite regained his form of before that barren 2017-18 season, some of his defenders would argue that Ter Stegen has had more of a chance to shine propping up an increasingly lesser team.

Maybe that will be the way again at the Luz, with a team battered but its outstanding goalkeeper unbowed. With Flick openly considering whether to pull Bayern’s players out of Germany’s scheduled Nations League games next month to give them a breather, the next twist in this winding journey might not be far away.

1 Gordon D’Arcy: the next fear for Irish rugby is England in Twickenham
2 Seán Moran: Fallout from Tyrone final celebrations will concern GAA
3 David Moyes discovered positive test an hour after arriving at London Stadium
4 Pro14 teams need private planes to keep show on the road
5 How Dundalk’s opponents Sheriff started on the wrong side of the law
Real news has value SUBSCRIBE