Simeone backs Suárez to use ‘gift’ and score against Chelsea 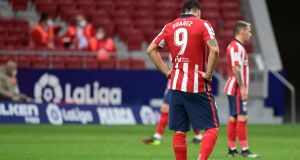 Top scorer in La Liga but Luis Suárez has not scored away in the Champions League for four years. File photograph: Getty Images

A grin crossed Diego Simeone’s face as he thought up the perfect defence of Luis Suárez on the eve of his return to a stage that has resisted him.

Although he has had a spectacular start at Atlético Madrid, top scorer in La Liga on 16, Suárez has not scored away in the Champions League for four years so Simeone was asked if that is something to worry about ahead of Tuesday night’s meeting with Chelsea. “Well,” he shot back, “tomorrow is the home game, so hopefully he will score. You might have to save that question for when we go to London.”

With flights to Spain from the UK blocked because of coronavirus restrictions, Atlético have been forced to play the first leg against Chelsea in Bucharest, obliging them to undertake a four-hour flight and a change of pre-match routine, but Simeone said that he had no complaints. He was also quick to praise the impact that the Uruguayan striker has had on his team, despite having now gone three games without a goal domestically and noted that Chelsea are also affected by the switch of venue, their flight lasting twice as long as it would have done to Madrid.

“We were given a list of options on venues and the club kept us up to date with what was happening. We have had to travel and we will train in the ground [to get used to it] but other than that we will treat it as any home game,” he said.

“We can’t worry about things that we can’t control and in moments like this where there are so many people working in so many different industries who are having difficulty, we are fortunate to be able to still do what we love, which is play football, wherever that may be.”

“Luis is important in all competitions because he brings us leadership. He gives confidence to our team and attracts the attention of the opposition,” Simeone added. “History is with him and he has a gift, which is to score goals.”

Simeone also described Thomas Tuchel as a “great coach who always makes his teams play well, wherever he goes.” He added: “He comes to a club that is very strong economically, with good players. This year they invested very heavily on young players and maybe the team didn’t respond as they would have liked so they made a change and brought in a great coach. Just looking at their three goalkeepers, the forwards or the subs you see that they have a huge amount of talent, lots of options, players who would be starters at any team in Europe.”

Asked if Thiago Silva’s absence was an advantage for Atlético, Simeone offered a one-word answer, delivered almost as gleefully as his response on Suárez: “No!” – Guardian