A ‘bonkers’ night of football: Why everyone is talking about VAR 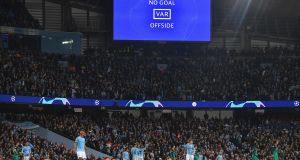 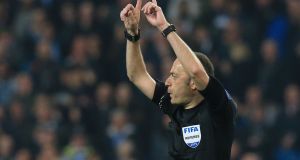 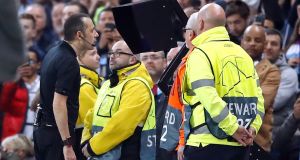 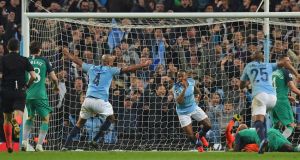 Manchester City’s Raheem Sterling celebrates scoring what would have been the decisive goal against Tottneham before having his bubble burst by VAR. Photograph: Anthony Devlin/AFP/Getty Images 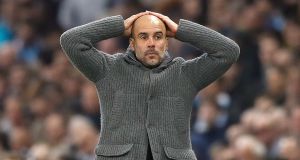 If football isn’t your cup of tea then you’d most likely have been oblivious to events in Manchester on Wednesday night, although come Thursday morning you might have wondered why all your football-loving acquaintances were walking about the place with mouths agape.

Go on then, bore me, what happened on Wednesday?

Well, as Gary Lineker, armed with a thesaurus, put it: “The most gripping, enthralling, exciting, amazing, bonkers evening of football we have ever witnessed in the Champions League.” Tottenham Hotspur actually lost 4-3 to Manchester City, but went through to the semi-finals on away goals having won the first leg 1-0 the week before.

Yawn, is that it?

No, no. There is nothing the final season of Game of Thrones could produce that would match the drama at the City of Manchester Stadium. Not only were there four goals in the first 11 minutes, a fifth in the 21st, and another two in the second half, the game was very dramatically decided by VAR.

Who’s he? Some Italian who cost €90 million?

No, VAR is the Video Assistant Referee, an official who sits watching banks of tellies upstairs in the stadium during a game, a bit like you’d see in Power City, and reviews major decisions made by the referee on the pitch, lest he misses something like an offside or a foul. VAR is assisted by AVAR, the assistant video assistant referee. (Are you still there? Hello?). And if the on-pitch referee is unsure himself about a decision, he runs over to the side to have a look at replays on a little telly.

VAR, which has been brought into football after ceaseless demands for video technology to be used to eliminate calamitously incorrect decisions in games, first intervened in the 74th minute when Spurs’ Fernando Llorente scored what proved to be the game’s decisive goal. Initially, though, it seemed that the ball had come off Llorente’s elbow, so referee Cüneyt Çakir checked the replays and eventually allowed the goal to stand, reckoning the ball had actually come off his hip. Apoplectic City fans were left concluding that the ref wouldn’t know his arse from his hip from his elbow.

Was that the end of it?

It certainly was not. City now needed to score, and they did just that through Raheem Sterling in added time (on 92 minutes and 22 seconds, to be exact). The celebrations in the stadium measured around 7.3 on the Richter scale, City manager Pep Guardiola Riverdanced along the touchline before nearly hugging the life out of his staff, and all the club’s account was able to tweet was “wfiuhefijvbeojefvnojegfnvepgfjevgpinbgw”.

A monumental one. VAR said hold yer horses, had a look at the replay and spotted that the left foot of another City player, Sergio Aguero, was in an offside position in the build-up to the goal, so it was ruled out. Guardiola collapsed to his knees, the stadium descended into a stunned hush, apart from the corner that housed the Spurs faithful which looked for all the world like they were bouncing on a giant trampoline. For the first time ever, then, Spurs had reached the semi-finals of the Champions League.

A big deal for them?

Huge. They’ve only won one trophy since the turn of the century and that was the League Cup so it doesn’t really count. There’s an enormous trophy cabinet in their brand new stadium, and they have nothing to put in it. But who knows, they might this season.

How did Manchester City take it?

Well, their midfielder Fernandinho only had a two-word response: “F*** VAR.” So, not great.

A complete hoot. Back to Lineker: “Goodness me, in your life have you ever seen a game of football quite like that? It had everything.” And more.

1 LeBron James among those to slam Drew Brees’ anthem comments
2 GAA players spend just 2.5 seconds within 2m of each other during play
3 How a GAA club sprang up in east Belfast over Sunday breakfast
4 Conor Stakelum answers the call after skating ambitions put on ice for now
5 Connacht continue player hunt as six academy graduates promoted
Real news has value SUBSCRIBE
Crossword Get access to over 6,000 interactive crosswords