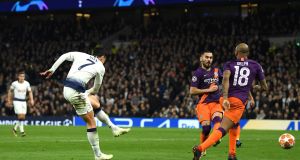 It was the kind of epic night for which this regal stadium was built and, by the time the match was all finished, the new home of Tottenham Hotspur had already created its own memories.

More than anything, there was the goal from Son Heung-min that puts Mauricio Pochettino’s side in a position of strength in this two-leg quarter-final. Or how about the penalty save from Hugo Lloris, a goalkeeper who has been under such scrutiny recently, when Sergio Agüero had a VAR-assisted chance to change the complexion of the evening.

These were moments the Spurs crowd will cherish, even if the victory was tempered by the grievous setback of losing Harry Kane to his latest ankle injury. Kane needed five weeks to get over the last one so it seems unlikely, in the extreme, that he will be available when the two sides renew acquaintances in Manchester next week. By which time City will surely play more like themselves.

Pep Guardiola’s team will still believe the damage is reparable but they will certainly need an improved performance if this is not to be remembered as one of the rare occasions when their manager himself may have come up short. His team selection must certainly have been perplexing for City’s supporters were it not the fact that, by now, they ought to know he gets a lot more of these decisions right than wrong.

Bernardo Silva’s absence stemmed from a minor training-ground injury. Not many people, however, would have predicted Riyad Mahrez being selected ahead of Leroy Sané, while Kevin De Bruyne’s omission was another unexpected choice, particularly after he served up such a sumptuous reminder of his passing ability for the decisive goal in Saturday’s FA Cup semi-final against Brighton.

Most people would conclude City are automatically a better team when De Bruyne plays. On this occasion Guardiola had put in place a different strategy featuring David Silva as the No 10 in a new-look 4-2-3-1 system and, most intriguingly, Fabian Delph doubling up as a left back and holding midfielder, flitting between the two positions depending on the whereabouts of the ball.

It was a bold system but there was also an element of risk to experiment with all these new plans before such a key assignment. Spurs were quick to the ball, strong in the tackle and determined not to let City build from the back.

Kane, in particular, chased down everything during his time on the pitch, playing with an urgency that suggested the home team knew they had to unsettle their opponents. Kane took several whacks for his troubles, particularly during one moment in the first half when Fernandinho clattered him with an elbow, and then repeated the trick while they were on the floor.

By that stage the Spurs crowd were chanting for VAR every time they felt a major decision against their team had been missed. The speed of the game was tremendous. So quick, indeed, that very few people seemed to notice Raheem Sterling’s shot had ricocheted off Danny Rose’s elbow for the incident that eventually led to the Dutch referee, Bjorn Kuipers, making that now-familiar rectangular motion with his fingers.

In fairness to the officials, the penalty decision was a justifiable one. To describe it as a shock, however, would be an understatement. City’s players were getting into position for a corner when the news flashed up on the four large screens at the top of the stadium.

The crowd were complaining that the ball was not properly placed for the corner. Not even Sterling had appealed for a penalty and suddenly Kuipers was running back from the VAR monitor to point to the penalty spot – with the vast majority of the crowd still asking what had happened.

Nobody could ever doubt Agüero’s reputation as a big-game player but, fortunately for Spurs, he also has an erratic record when it comes to penalty-taking. He aimed this one to the left of Lloris but the shot lacked power and precision. Spurs desperately needed their goalkeeper to rescue them and Guardiola, who chose not to watch, would have known from the noise of the crowd that the opportunity had been wasted.

The game was brilliantly poised but it would be difficult to understate the importance of what happened, 10 minutes into the second half, when Kane threw himself into a challenge on Delph directly in front of the Spurs dugout.

It was a robust tackle from Kane, in keeping with the night, and Delph’s reaction was to give his England team-mate a mouthful for what he thought was an unnecessary show of force.

Kane, however, had no interest in prolonging the argument. He was holding an ankle and as soon as he rose to his feet, he never looked back at the pitch again, eventually hobbling down the tunnel with the aid of one of the club’s medics. The cheer from the City end told its own story. They knew, just as the home fans did, what a blow this could be for Spurs.

For the next quarter of an hour City looked the more likely winners. But Spurs always carried a threat in attack, even without Kane, and in the 78th minute Son had the ball close to the byline. He cut back on himself, eluding Delph in the process, and his shot went under Ederson. – Guardian