Liverpool’s raging flames engulf Barcelona on night for the ages 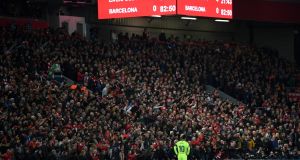 Do not adjust your reality. This really is happening. There have been glorious, entirely improbable games in Liverpool’s European history, including the mind-bending highs of Istanbul.

But this was something else, an effort of will that, frankly, took the breath away. On a rapturous night Liverpool’s season of chasing to the end narrowed first to a fine point; then burst into the most extravagant life as a 1-0 half-time lead against Barcelona became two, then three, then four.

With 79 minutes gone, the most celebrated team of the modern age had been reduced to bunch of mooching, stumbling yellow-shirted spectators. A Champions League season that had seemed to be zeroing in on another coronation for Lionel Messi had been wrenched, gleefully, the other way.

It will instead be Liverpool in Madrid on the first day of June for another shot at the ultimate. Presumably, Sergio Ramos, season long since over, will receive a comp ticket. These gestures all count.

There were two moments that captured the essence of victory. One was the final whistle. Full-time celebrations come and go. We’re used to the huddles and high-fives. But this was something else, a moment of collectivism, sucking the sweetness from the moment, that seemed to speak directly to the performance that preceded it.

It was bedlam. There were seething huddles in the aisles, bodies lifted and hugged and grappled. A well-known television pundit whirled his arms around and yelled at the sky. The bench came running on to the pitch. The manager came running on. The players came on. Look closely and the man who runs Robinsons News around the corner probably came on.

As Jürgen Klopp took Sadio Mané in his arms and spun him like a beloved ballroom partner, there was a moment of sing-song communion with the Kop. They love these big fat emotional notes here.

Who wouldn’t? Resist if you like but this is a part of English football, a sustained chord in its upper registers; and the place, in the end, where victory came from.

At moments like these it is customary to pick out a star player. This was something else though, a performance with a startling unity of purpose. It was the unlikely figure of Georginio Wijnaldum, a half-time sub, who scored twice in the second half to level the tie on aggregate; and at the time you just thought, yes, of course. More, more of this.

Barcelona had been harried and hurried and stretched thin by the midway point in the second half. Tackles flew in. Toes were crushed, shins barked, ankles hacked.

It was classic red fury from the Klopp-metal playbook. When they come out and play like this there is something brilliantly reckless about them. Wherever this team go from here, whatever they end up winning, you suspect moments like these will remain the fondest memories.

The move that killed the game came from another place. It was cold. It was ruthless. It was, whisper it, very funny. Trent Alexander-Arnold had already had a sensational game. He is not so much a full-back as a playmaker from the right flank, utterly fearless in his movement and his passing.

As Liverpool won a corner he walked across to take it, looked up, wandered away then suddenly turned and spanked a low, hard cross as the yellow shirts milled about, lost in their own game.

Barça had frozen. Alexander-Arnold saw it, caught Divok Origi’s eyes and pinged the perfect cross for a double-take of a winning goal. This was a 20-year-old local lad, product of down the road, out-thinking Barcelona, making them look like callow, pigeon-chested schoolboys.

Barça were poor from the start. The problem with being a one-man team is when he does not turn up it tends to leave a hole. Not that victory was in sight yet.

Anfield had been the usual portable pageantry of flags and banners and songs before kick-off. With the sky still blue above the away end the Barcelona fans stood and watched and took pictures and joined in the pre-match round of You’ll Never Walk Alone.

Barcelona have had a habit of collapsing like a poorly constructed millefeuille in away legs over the past four years. But still, as Jordan Henderson hurled himself about in midfield like a labrador puppy chasing flies, as Mané pressed with sniping menace on the left, there was something valedictory in the air. A 1-0 half-time lead felt a Viking funeral for a season during which the home team have pushed themselves to the outer limits of their capacity.

The opening goal was made by a horrible mistake by Jordi Alba and finished by Origi. Cue uproar. Cue more uproar. Fabinho was booked for late lunge into the ankle of Luis Suárez. Cue outrage, fury, wind, lightning, the sound of horses barking.

Barcelona were quaking, taking in great, gulping breaths of air. They finally began to play in stoppage time, a team aware suddenly of what was happening to them. Too late. Liverpool were never going to let this slip.

There may have been more gloriously unbound nights in English football’s European history but this was an occasion that stands on its own, the night when the shadow trophies and cups seemed to fade and Liverpool found a moment of pure joy. – Guardian