Diego Simeone: A despiser of defeat and weak players 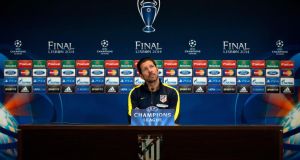 Atletico’s coach Diego “Cholo” Simeone ponders a question at a recent Champions League final news conference. “It’s hard for me to interact with players who don’t give themselves completely. The weak don’t interest me.”

Last Saturday evening at the Camp Nou Barcelona surrendered its Spanish league title following a head-to-head encounter with Atlético Madrid. Seconds after the final whistle blew, the stadium burst into a standing ovation. Barça’s supporters, 99,000 of them, along with only 400 travelling Atlético fans, were keen to applaud a monumental achievement.

Atlético had won its first championship after an 18-year wait. It has been a long road, although it is the final stretch of the journey, since Diego Simeone took over as manager in December 2011, that beggars belief.

At the time, the club was a shambles. It was mired in debts totalling over a half a billion euros. To keep the taxman at bay, star strikers, Diego Forlán and Sergio Agüero, had been offloaded during the offseason, to Inter Milan and Manchester City respectively. The midfielder Diego, who was on loan from German side Wolfsburg, filed a claim for unpaid wages. The club played without a permanent shirt sponsor. At one stage during the season, Columbia Pictures used their jersey as a billboard to promote a ‘film of the week’, but there was nothing box office about the team’s performances.

Atlético languished four points from the relegation zone in La Liga when Simeone arrived two days before Christmas. Albacete, a third-division outfit, had just knocked it out of the Copa del Rey, Spain’s cup competition. Personnel came and went like visitors to a fairground. It had been averaging 14 new players a season for over a decade. Simeone was the club’s 49th manager to be appointed – Big Ron Atkinson among them – since 1987. Man possessed Not that the disarray bothered Simeone. He arrived like a man possessed. He said that “energy” was pumping through him on the flight from Argentina. He was returning to the club he knew he would manage one day, having captained Atlético to its previous league triumph, a historic league-and-cup double-winning campaign in 1996, scoring the winning goal with a header in the game that clinched the league title.

There were small amendments made – the colour of the nets at the stadium was changed, for example, from black to match the club’s red-and-white strip. And there were big ones. He worked most on the players’ minds, who, according to their captain, Gabi, were “mentally sunk” until Simeone started invading their thoughts. He likes to give his one-on-one pep talks on the night before matches just before a player goes to bed because he reckons it’s the best time for his messages to sink in.

He chose men in his likeness, ones who despise defeat, which was a revolution for a club with a fatalist tradition (its nickname is “El Pupas,” the jinxed ones) and one that lives in the shadow of its illustrious city rivals, Real Madrid. “It’s hard for me to interact with players who don’t give themselves completely,” admitted Simeone. “The weak don’t interest me.”

A few players like Arsenal prodigy José Antonio Reyes were shipped out. He rallied a squad of journeymen, reflecting recently: “Everyone wanted to get rid of Tiago. Arda Turan didn’t realise he was allowed to run backwards as well as forward. Juanfran wasn’t a fixture at full-back. Miranda wasn’t in the team. Diego Godin wasn’t what he is now. Felipe Luis did not play.” Stopping shots All six started against Barça last weekend, as part of a remarkable make-do-and-mend philosophy, epitomised by the performances of the young Thibaut Courtois, who has been imperious in goal during his three-year loan spell from Chelsea, even stopping shots that go wide.

Last summer, Simeone was forced to replace his prolific striker Radamel Falcao, who was sold to Monaco to assuage creditors, by kick-starting Diego Costa’s career. After several years out on loan, Costa scored 10 league goals last season. This season, he netted 27 in the league, eight during Atlético’s unbeaten Champions League run, and muscled himself into Spain’s international team – forsaking his native Brazil – on the eve of the World Cup, although he is still receiving treatment for a recurring hamstring injury for tonight’s Champions League final, but looks a major doubt.

Simeone has been largely fortunate on the injury front, however, given Atlético have waged war on three fronts with a limited squad, having lost in the semi-final of the Copa del Rey. Six of his players were amongst the 10 most used players in La Liga this season. He has called on Atlético’s supporters to act as a 12th man, rallying them in evangelical TV camera exchanges: “No one sleeps and no one eats until they turn the lights out on us.” At every home game at the Vicente Calderón, he addresses the crowd constantly, his arms swinging skywards like a wine-bottle opener, exhorting fans to roar on their team.

Energy is a key theme with him. He doesn’t rest. During his playing days with Atlético, his old team-mate, Kiko Narvaez, remembers Simeone refusing to let team-mates have a siesta before a game – he was at a loss to know why they’d want to take a nap. He still plays out matches while manger as if he was on the field, straining at the edge of the technical area like a guard dog on a leash, heading imaginary balls, his foot kicking out involuntarily, his arms gesturing towards where the ball should travel.

He’s taken his playing style into management. He was a street-fighter, who used to like play the game, he has said, as if he was “holding a knife between his teeth”. He amassed 106 caps for Argentina, including a fateful night when he helped engineer David Beckham’s sending off in the quarter-final of the 1998 World Cup.

He was never afraid to speak his mind to more senior teammates in Argentina’s dressing room. Football coursed through his veins. “Every barbeque we went to was like a team talk,” said Matías Almeyda, who played with him on the national team and at Lazio. “We used to tell him to shut up, leave it. Enough was enough. We just wanted to relax but he always managed to bring it back to the same thing – football.” Trophy cabinet Silver has piled up in Atlético’s trophy cabinet under Simeone’s reign, including a Europa League title, a European Super Cup and, significantly, a Copa del Rey final win against Real Madrid at the Bernabéu Stadium last May. It was the club’s first defeat over its city rivals since 1999, having lost 10 encounters in a row, and it marked an ignominious end to José Mourinho’s time as manager of Real Madrid.

All season, Simeone played down Atlético’s Spanish league title chances. He was never bullish in his exchanges with the press. When pressed, he peddled the clichéd, “game by game” mantra. He said it would be “impossible” to win a championship in Spain, in a league he called “boring” because of the Barça-Real Madrid duopoly; one of the pair might falter, but never both. Their budgets are five times Atlético’s.

In an hour-long interview on Onda Cero, a Spanish radio station, during the spring, he pleaded his case: “The fans of Athletic Bilbao, Real Sociedad, Osasuna and Sevilla can all identify with us. We are fighting against two monsters with huge squads, great players and top managers. We want to be a nuisance. We want to be the team that no one can stand to play.”

Atlético have made the impossible possible with last Saturday’s league title win. He is coveted by the owners of Europe’s leading clubs. He says he would like to manage in Serie A, where he enjoyed several fruitful years as a player, including a double-winning season with Lazio in 2000 under Sven-Göran Eriksson.

The English Premier League, too, is a likely destination, although he doesn’t speak English, and his managerial record is not without blemish. He left the helm at River Plate in November 2008 when the club was rooted to the foot of Argentina’s premier division, and in April 2010, he quit as manager of San Lorenzo with the sound of booing from the terraces ringing in his ears.

He majors on siege mentality – a popular trope with Mourinho, a manager he admires – for his battle cries with Atlético, but he might find it hard to foster the underdog mentality in a big English club like, say, Chelsea or Manchester City. He talks always about the need to be authentic and the importance of “belonging”. That embattled, tribal feeling will come easily for him, of course, in his team speech before the Champions League final against Real Madrid in Lisbon.

Atlético have only been in one European Cup final. That was 40 years ago, and they lost 4-0 in a replay to Bayern Munich. Real Madrid is gunning for its 10th crown. After bagging a domestic league title, the pressure is off Simeone’s Atlético. Were it to scupper its city rivals, it would trigger elephantine celebrations for the club, surpassing even the scenes after its “double” in 1996 when its late owner, Jesús Gil, paraded through the streets of Madrid on an elephant.