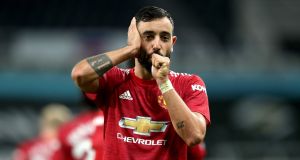 Bruno Fernandes has promised there is plenty more to come from him in a Manchester United shirt, despite the remarkable impact he has had since his January arrival, as he prepared to captain the club for the first time in Tuesday night’s Champions League opener against Paris St-Germain.

The attacking midfielder will wear the armband as Harry Maguire has not travelled to Paris because of a minor injury. The usual captain is one of a clutch of absentees that also include Mason Greenwood, Eric Bailly, Edinson Cavani and Jesse Lingard.

Greenwood was an unexpected withdrawal from Saturday’s crucial Premier League win at Newcastle and there was mystery over the nature of the 19-year-old’s injury with Ole Gunnar Solskjaer refusing to provide any detail on it.

“That’s between, errr …. I can’t declare medical stuff, can I?” Solskjaer said. “We hope it’s just a niggle and, as young as he is, we don’t want to take any chances with him so hopefully at the weekend he’ll be fine again.”

Solskjaer denied that Greenwood’s absence was for disciplinary reasons.

Fernandes has scored 15 goals and made 11 assists in 27 appearances since joining from Sporting Lisbon for a basic €55m plus €25m in add-ons.

“I think I am playing well in the last few months but you always have to improve and I can do much better than I did before,” Fernandes said. “I know my numbers are good but I am sure I will do better numbers and better games.”

Solskjaer announced that Fernandes would be the captain at his pre-match press conference at which the pair sat together and the news appeared to take the Portuguese by surprise.

“I was not expecting this, I know the . . . time as you,” Fernandes said, via a wobbly video conference feed. “It’s an honour. But everyone is the captain, everyone needs to help and be a leader in their own way.”

With no Maguire or Bailly, Solskjaer will rely upon a makeshift central defence against the might of Neymar and Kylian Mbappé as he looks for another shock result in Paris. Two seasons ago, when in caretaker charge, his team beat PSG 3-1 to advance to the Champions League quarter-finals.

“That’s history for us, it’s in the past,” Solskjaer said. “Great history, great game but it has no impact whatsoever. We’re a different team, they’re a different team and it’s a different stage of the competition. And without fans, it’s going to be a different game. In the last game when we got the first goal early on, that impacted the ground. This is a completely new situation.”