Side have conceded 63 goals in 43 league matches 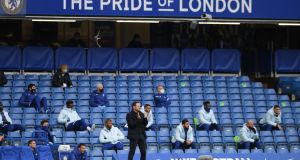 Frank Lampard knows that the numbers do not say much for his ability to organise a defence. Unflattering statistics show that no Chelsea manager with more than one game in charge has seen his side concede at a higher rate in the Premier League than Lampard, who witnessed another defensive implosion when Southampton fought back to earn a 3-3 draw at Stamford Bridge on Saturday.

The goals-against column rose to 63 in 43 league games on Lampard’s watch when Jannik Vestergaard headed in Southampton’s equaliser in stoppage time. That translates to almost 1.5 goals a game, which feels unsustainable even though plenty of other Premier League defences have struggled since the start of this weirdest of seasons.

However, Lampard had stats of his own with which to respond before Chelsea open their Champions League campaign by hosting Sevilla on Tuesday. “In terms of the goals conceded, I am aware of the stats,” he said. “The other stat is that since we have been here we have conceded the second least shots in the Premier League behind Man City, so sometimes it helps you to narrow down some of the issues. And the issues are that we don’t concede too many shots on goal but when we do we concede goals. It’s something we are aware of when you look at our recruitment.”

It was attack as the best form of defence from Lampard. Yes, the goals conceded were a bad look. But since August 2019 City have faced 320 shots (including blocks) compared to Chelsea’s 379 and Liverpool’s 386, indicating that coaching a team to function as a unit off the ball might not be beyond Lampard.

Equally it was hard not to interpret Lampard’s comment as a veiled dig at individuals within his defensive setup. After all, limiting shooting opportunities means little without a steady goalkeeper.

Which leads to Kepa Arrizabalaga. Last season the £71.6m (€78.7m) goalkeeper had a save percentage of 54.5 per cent, the lowest in the top flight, and he struggled at the start of this campaign, losing his place after Chelsea’s 2-0 defeat to Liverpool last month.

A new goalkeeper was a priority for Lampard in the summer and he found one when Chelsea signed Édouard Mendy from Rennes. Yet after starting in the 4-0 win over Crystal Palace this month, the Senegalese missed the Southampton game with a thigh injury. Arrizabalaga failed to inspire confidence after returning to the side, and if Mendy fails a late fitness check after having trained on Monday, Lampard must decide whether to stick with the Spaniard or recall Willy Caballero against Sevilla.

“In football we have difficult times,” said Chelsea’s captain, César Azpilicueta. “Sometimes you feel like everything goes against you. You have to have the character to face it. I have no doubt Kepa will work hard to reverse the situation.”

Lampard also spoke about working hard in training. Yet while his point about shots faced was valid, the argument only goes so far. Chelsea rarely had control against Southampton, particularly during the second half.

Gifted attackers did not press well enough and N’Golo Kanté and Jorginho were often caught too high up the field in central midfield. Doubts remain over whether Jorginho and Kanté complement each other.

Ultimately, though, positioning comes down to the manager. If Jorginho and Kanté needed help against Southampton, perhaps the answer was to stiffen the midfield by introducing Reece James. Yet Lampard remained attacking, bringing Hakim Ziyech off the bench, and Southampton’s pressure resulted in Vestergaard’s equaliser.

In that context it is not a surprise to see individual errors. Chaos leads to frazzled thinking, especially from a quiet, inexperienced group. Chelsea made bad decisions on and off the ball against Southampton and Lampard, who is still searching for the right balance, felt his side did not manage the game well. “When we are on the pitch individually and collectively we have to make better decisions, dig in, lock the door and finish,” Azpilicueta said.

Perhaps the return of Thiago Silva in central defence will give Lampard a leader against Sevilla, who defeated Manchester United and Wolves en route to winning the Europa League last season and who will test Chelsea’s nous. Lampard needs solidity and maturity from his side in order to prove his contention that the numbers do not tell the full story about his defensive acumen. – Guardian