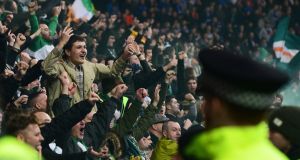 Kenny Miller’s early opener gave the hosts hope but Celtic soon established their dominance after Moussa Dembele netted his 19th goal of the season — and his fifth against the Light Blues.

A breathless affair was then settled when Sinclair pounced with 20 minutes left, giving the visitors their first triumph in Govan since a Georgios Samaras-inspired victory in January 2011.

Miller blew the chance to claim a point for Mark Warburton’s team — back in the top flight after their four-year exile — when he scuffed a close-range shot against the post late on.

The rampant Hoops now move 19 points clear at the top of the Ladbrokes Premiership after chalking up their 15th straight league win.

Rangers’ plans suffered a blow before the game had even started when it was confirmed a hamstring injury had ruled out skipper Lee Wallace, but Clint Hill was able to shake off a dead leg and take his place in a three-man back-line.

Rodgers’ only real selection dilemma was whether he went with this term’s top-scorer Dembele or last season’s 40-goal frontman Leigh Griffiths, with the Frenchman getting the nod.

A minute’s silence was held before kick-off in memory of the victims of the 1971 Ibrox Disaster, however it was spoiled by a handful who could not stay quiet.

The noise levels were almost sent soaring within 25 seconds of the action starting as Rangers’ Jason Holt saw his opening effort deflected wide.

Craig Gordon saved another of his efforts soon after but the hosts were emboldened by their positive start.

That early confidence was almost shattered when Rob Kiernan switched off as Mikael Lustig lined up a free-kick from deep but Sinclair dragged his shot.

With that let-off, Rangers looked to take advantage 13 minutes in and found their opening as Josh Windass exchanged passes with James Tavernier, sending the wing-back to the byline.

Miller had positioned himself in between Jozo Simunovic and Erik Sviatchenko and Tavernier’s ball across was timed just right for the veteran to slide home.

Joe Garner injured his shoulder in the build-up and had to be replaced by Martyn Waghorn.

The goal was a shock to the Parkhead ranks, given the almost unending superiority they have enjoyed over their domestic rivals this term.

Rodgers’ men had looked as ragged as they have done all season in the opening quarter hour, while the fight missing for Rangers’ last two derby performances was there in abundance.

Celtic’s quality, however, soon shone through.

There was a close shave for the hosts after 34 minutes when Sinclair danced his way past Kiernan before rifling the ball off the base of the post. Hill did just enough to beat the Hoops winger to the rebound as he cleared for a corner.

But from the set-piece, Dembele pounced. Hill and Danny Wilson were both caught under Sinclair’s deep delivery as Dembele steadied himself with a touch before firing a terrific drive into the roof of the net.

The pace had been frantic during the first half but was just as quick as the action restarted after the break.

Dembele wasted a great chance for his second five minutes in as he failed to connect with a Lustig cross after a swift Celtic counter, while Wes Foderingham blocked well to deny James Forrest.

Dembele was denied by the crossbar when he did well to get a boot to Callum McGregor’s cross, with Sinclair unable to turn home on the follow-up.

The hosts thought they had the lead when Wilson wriggled clear at Tavernier’s corner, but Gordon’s wrist was strong enough to keep out the centre-back’s header.

And with the disappointed Rangers groans still circling the ground, Celtic grabbed the winner. Substitute Patrick Roberts picked out Stuart Armstrong inside the penalty area, and he calmly steered the ball across goal from the right to the back post for Sinclair to tap home.

Foderingham had to keep out efforts from Stuart Armstrong and Dembele as Celtic hungrily went for more but Rangers continued to fight.

Miller, though, somehow fluffed a shot onto the woodwork with 10 minutes remaining when it looked easier to score before nodding in wide in stoppage time as Rangers chased a dramatic leveller.

Gerry Thornley on rugby without fans, Phase One sees courses and courts open again
Here is your handy guide to sport on television this week

1 Sideline Cut: Vignette shows why Bird is the true shark in The Last Dance
2 Seán Óg Ó hAilpín regrets ‘callous’ aftermath of Cork strikes
3 Rory McIlroy now realising the power his words carry as world’s number one
4 Coming fourth in the Olympics didn’t change this fearless quartet, time did
5 O’Leary says himself and Kingdom star Galvin were the best of enemies
Real news has value SUBSCRIBE
Crossword Get access to over 6,000 interactive crosswords