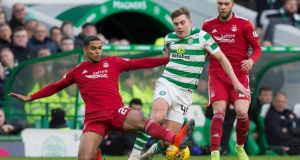 Interim Celtic boss Neil Lennon endured an afternoon of frustration on his return to Parkhead as his side were held to a 0-0 draw by Aberdeen.

The former Hoops captain and manager returned after the departure of Brendan Rodgers to Leicester but after wins at Hearts and Hibernian his homecoming in the Ladbrokes Premiership was spoiled by an organised and dogged Dons side.

It was a strangely insipid performance from Celtic, who dropped points at home for the first time this season.

But the Hoops did restore their eight-point lead over Rangers at the top of the table as they bid for an eighth successive title and the unprecedented domestic treble treble.

Aberdeen, for their part, will take massive confidence from their performance as they turn their attention their William Hill Scottish Cup quarter-final replay against Rangers at Ibrox on Tuesday.

Lennon, given a huge ovation by the fans before the game, brought back defender Jeremy Toljan for Mikael Lustig and Ewan Henderson for Odsonne Edouard while Dons striker James Wilson came in for injured former Celt Gary Mackay-Steven.

The Dons would probably have expected more pressure than they had to survive early on but they remained organised and disciplined, albeit rooted in their own half.

On the half-hour mark Celtic defender Kristoffer Ajer strode forward to drill in a shot from the edge of the box which was tipped past the post by goalkeeper Joe Lewis for another corner, which again was dealt with by the Dons.

A minute before half-time Ajer had the ball in the net from a Henderson free-kick with a powerful header but the offside flag was up.

Lennon made interval changes, bringing on French striker Edouard and winger Mikey Johnston for Henderson and Scott Sinclair while the visitors replaced Wilson with Dean Campbell.

Oliver Burke was moved wide for Edouard to operate through the middle but it was Aberdeen who began to threaten.

In the 51st minute, just after midfielder Connor McLennan passed up a chance to shoot inside the Celtic penalty area, defender Dominic Ball weaved his way into the Hoops box but his angled drive was blocked by the feet of Parkhead keeper Scott Bain.

In the 58th minute a swift Celtic move involving Toljan and Burke ended with Lewis saving from Edouard’s drive from a tight angle.

The home side stepped up the tempo and Aberdeen’s defending became more desperate.

Timothy Weah replaced Burke in the 78th minute and the league leaders pushed for a late winner.

Two efforts from Johnston escaped the far post while at the other end Dons substitute Stevie May, on for Greg Stewart, headed a Sam Cosgrove knock down over the bar in the final minute, before Celtic ran out of time.