EPL round-up: Newcastle turn it around against Everton 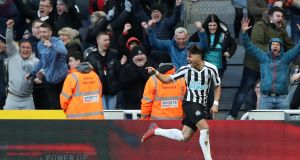 Ayoze Perez scored a late double as Newcastle fought back to win a five-goal thriller on an afternoon Everton keeper Jordan Pickford will want to forget.

Pickford had earlier escaped a red card after conceding a penalty which he saved, but was beaten three times inside the last 25 minutes as the Magpies roared back to snatch a priceless 3-2 victory.

Marco Silva’s men looked to be coasting after Dominic Calvert-Lewin and Richarlison had given them a 2-0 lead either side of Matt Ritchie’s missed spot-kick, but Salomon Rondon’s strike set up a grandstand finish in which Perez struck twice inside three minutes to help the Magpies claim a fifth successive home win.

The visitors started on the front foot and took the lead with 18 minutes played. Bernard’s fine reverse pass put Digne into space and his cross was expertly headed home by Calvert-Lewin at the near post. Richarlison then tapped home Bernard’s cross from close range to double the lead.

The Magpies kept pressing and they were back in it with 25 minutes remaining. Perez headed the ball down to Rondon and after collecting the return pass, crossed for the Venezuela international to volley past Pickford. The game was blown wide-open with nine minutes remaining when Pickford could only parry Miguel Almiron’s blistering strike and Perez steered the rebound home, and St James’ Park erupted when the Spaniard stabbed home from close range three minutes later to win it.

Cardiff kept in touch with the Premier League strugglers above them by beating West Ham 2-0. Junior Hoilett and Victor Camarasa scored as Cardiff ended a run of three successive defeats with a victory that was rarely in doubt from the fourth minute.

But Southampton’s comeback win against Tottenham leaves Cardiff in the bottom three and two points from safety.

Although Cardiff remain in the relegation zone with eight games left to play, this victory will offer hope to Neil Warnock’s side that they can survive. Half of those games might be against top-six sides - Chelsea and Liverpool at home and the two Manchester clubs away - but there are enough opportunities to pick up points from sides around them.

What they are unlikely to face, however, are opponents as insipid as West Ham. The Hammers might have won their last two games, but travel sickness has set in and Manuel Pellegrini’s side have now lost five of their last six on the road without scoring.

West Ham’s fate was sealed from the fourth minute when Hoilett finished smartly at the near post. After holding a half-time lead for only the second time in 30 their Premier League games, Cardiff’s win was secured when Camarasa squeezed home a second seven minutes after the interval.

Callum Wilson scored on his return to action as Bournemouth halted their away-day blues with a 2-0 win at bottom club Huddersfield.

Wilson, back from a seven-week injury lay-off, chested home a first-half opener and laid on Bournemouth’s second for Ryan Fraser in front of watching England boss Gareth Southgate.

The Cherries snapped a nine-game Premier League losing run on the road, while a 15th defeat in 17 league matches for Huddersfield nudged them closer to the trapdoor.

Bournemouth carved out the first opening when Wilson’s low shot from inside the right edge of the area was comfortably saved by Huddersfield goalkeeper Jonas Lossl. But Wilson, back in Eddie Howe’s starting XI after a knee injury, did not waste his second chance as Southgate looked on to assess his fitness before naming his squad for next month’s Euro 2020 qualifiers on Wednesday.

Fraser scampered clear down the left and his cross was chested home by Wilson at the far post with Lossl stranded. It was Wilson’s sixth goal in seven league appearances against Huddersfield and his 11th in the Premier League this season.

Bournemouth wrapped up the points in the 67th minute as Wilson raced on to King’s defence-splitting through-ball and showed great awareness to cut the ball back for Fraser to sweep home from six yards.

Jamie Vardy passed a century of goals for Leicester as the Foxes piled further misery on doomed Fulham. The striker scored twice late on to take his Foxes tally to 101 and seal a 3-1 win in Brendan Rodgers’ first home game in charge.

Youri Tielemans’ first goal for the club opened the scoring as Leicester rose to 10th in the Premier League. Floyd Ayite’s first goal for over a year hauled the Cottagers level but they slipped to a sixth straight defeat.

Scott Parker’s side are second bottom, 13 points from the safety line, and looked destined for an immediate return to the Championship.