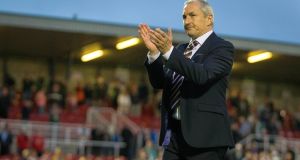 John Caulfield: “You have guys at some clubs in League Two in England on £150,000 a year.” Photograph: Ryan Byrne/Inpho

Cork City boss John Caulfield says he is looking outside Ireland for a striker, one of two players he feels he needs to complete his squad for next season.

City have re-signed Karl Sheppard and recruited Josh O’Hanlon but Caulfield expects Achille Campion to depart and is clearly anxious to bring in someone with the potential to add more goals to a side that found them much harder to come by in the wake of Sean Maguire’s departure for Preston.

“Campion is under contract, we’re in discussions at the moment, but he has a few options of moving on and I reckon he’ll probably explore those,” he says.

“I want to bring in guys who can compete with each other so if one guy is missing someone else can come in and do the business and put the ball in the back of the net. I’ve met a few people. I don’t think there’s anyone in Ireland I’ll get.”

Recruiting from the lower leagues is, he says, almost impossible due to the wages on offer there and so City are looking to Europe and hoping to persuade a player with proven ability that the club can provide a stepping stone.

“You have guys at some clubs in League Two in England on £150,000 a year,” he says. “There are certain clubs where the average might be £50,000 a year but that’s the lowest of them. Guys at that level over there are on much better contracts than here.

“A lot of people say Dundalk are the top payers, I don’t know but how much are they paying? They say Finn went to Rovers on €70,000. That would seem a massive wage over here but in England it’s nothing. As well as that, all of these players have traditionally been on 52-week contracts so you’re not going to get them for nothing.

“Sometimes Europe is easier because there are fellas floating around, places like Holland and Belgium. They don’t look at the Irish market enough. We have to promote ourselves and show that if they can get into a top team here and do well, they can get a move over. We need to sell that more which we haven’t done. Maybe the likes of Maguire going over...”

English clubs, he suggests, are not alert enough to the quality of the best players here or the experience they gain playing in Europe and the biggest domestic games and even Maguire, he suggests, had to sell himself a little short in order to get the opportunity to prove himself.

“Maguire went in on a contract there where he’s on a lot less than the rest of their team. But thankfully he’s gone in and done the business and when he comes back from injury and he starts scoring they won’t hold onto him unless they give him a better contract. That’s the way they treat you.”

Preston, as it happens, have provided Maguire with a lot more competition for his place when he returns from injury in the new year with the club yesterday signing Louis Moult from Motherwell for a fee believed to be in the region of €550,000, which would have been far higher but for the fact that the 25- year-old, who scored 50 goals in 98 appearances for the Scottish club, would have been out of contract next summer.