All in the Game: David doubles up in calls for Dalglish

Best training ground bust up; word of mouth; by the numbers and more 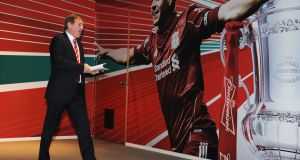 Sack Klopp, bring in Dalglish and wait for Gerrard. Sounds like a plan. Photo: Michael Regan - The FA/The FA via Getty Images

Granted, David isn’t an entirely uncommon name and no doubt plenty of Davids support Liverpool, but still, you’d have been scratching your chin a little on Saturday evening after both BBC radio and talkSPORT took calls from a Liverpool fan by the name of, well, David in the aftermath of the Merseyside derby.

The BBC David was exceedingly angry after Everton’s 2-0 triumph, but had a solution for Liverpool’s current woes: sack Jurgen Klopp, replace him with Kenny Dalglish (who hasn’t been in management for nine years) until the club can lure Steven Gerrard from Rangers.

The talkSport David was no less angry, but had a solution for Liverpool’s current woes: sack Jurgen Klopp, replace him with Kenny Dalglish (who hasn’t been in management for nine years) until the club can lure Steven Gerrard from Rangers.

Far be it for us to promote conspiracy theories, but the one that suggests this is the same David and he’s actually a Manchester United fan seems quite, well, solid.

“Special games bring more fear but that is not a bad thing because if you don’t have fear then you are going in front of the lion thinking it is a cat. But it is not a cat, it is a lion.” - Carlo Ancelotti ahead of the Merseyside derby, after which he was purring like the lion who got the cream.

43: That’s how many goals Erling Haaland has now scored for Borussia Dortmund, with five in three games in the last week. In how many games? Forty-three. The boy? A wee bit special.

“The art of goalkeeping is dying. The main criteria these days is to be 6ft 4ins - and it doesn’t matter if you’re a coward. They’re not prepared to get a smack in the teeth or the nose to keep the ball out of their net. People might say ‘John Burridge is a dinosaur, what does he know?’” - Long-retired goalkeeper John ‘Budgie’ Burridge who got many a smack in the teeth in his 30-year-career, during which he played for just the 29 clubs.

“I like your moustache, Fred. You are so attractive and sexy.” - Pep Guardiola to Brazilian reporter Fred Caldeira at his press conference last Friday, Fred thanking him for the compliment and revealing that he used to have a beard too but lost it during lockdown (but didn’t explain how he mislaid it). We need more pleasant press conference exchanges like this.

“Kylian, stay in France. We want to continue watching you play here. We need you, the public needs you, PSG need you and our young people need to have role models and examples to look up to. Please, don’t leave us, stay here in France.” - A plea to Mbappe not to depart Paris for pastures new, like Madrid or Barcelona. From? The French Minister of Sport, no less, former Olympic silver medalist in swimming Roxana Maracineanu.

“They’re on that slippery rock. Look at some of the players – Jonjo Shelvey, Dwight Gayle, Andy Carroll – past his sell by date – Joelinton – couldn’t hit a barn door with a pea.” - Newcastle old boy Mick Quinn somewhat doubting that the club has the quality to avoid relegation.

We’ll go with the one Andros Townsend dug up from the archives and shared with talkSPORT about the time two of his team-mates at QPR, where he was on loan in 2013, had a run-in during training, at which point things took quite an unusual turn.

“I can’t use any names, but there was a fight on the training pitch and a player has gone to his car for tear gas,” he said. Yes, one of the players had tear gas in his car, like, you know, you do.

While Townsend wouldn’t name names, talkSPORT noted that another former QPR player had done so last year when he recounted the same incident. The tear gas owner, Marc Bircham had revealed, was Armand Traore.

“Where have you got that from,” Bircham asked him when he returned from his car carrying a can of the stuff. “’My boot’, he replied. I was like, ‘what the **** have you got tear gas in the back of your boot for, you’ve been playing too much Call of Duty’. But he said, ‘no no, I have it in case there is trouble ...... and there’s trouble now’.”

Hats off to Bircham, though, he successfully defused the situation by making a quite reasonable plea to Traore. “I went to him, ‘can’t we just go back to the old days where we’ve got baseball bats or golf clubs? You’ve got tear gas, mate’.” People have won the Nobel Peace Prize for less.