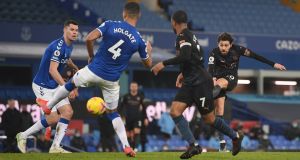 Carlo Ancelotti had drilled Everton to defend, frustrate and counter Manchester City and, in keeping with their previous 16 assignments, the Premier League leaders dismissed the challenge with contemptuous ease. Pep Guardiola’s team moved 10 points clear at the summit, and with a game in hand on second placed Manchester United, with another exhibition of their vast superiority at Goodison Park.

Bernardo Silva’s goal, their third in a convincing victory, encapsulated the quality and confidence that is oozing through the City ranks. An incisive one-touch move involving Rodri, Riyad Mahrez and Gabriel Jesus invited the Portugal international to round a statuesque Everton defence before planting a low drive through Jordan Pickford’s despairing dive.

The polished goal sealed City’s 12th successive league win, a 17th in all competitions and a little slice of history. City became the first team in top flight history to win their opening 10 matches in a calender year. That United previously held the record along with Bolton, in 2009 and 1906 respectively, will add a little more relevance to the achievement for City.

A City team blessed with attacking, creative talent was supplemented by a substitutes’ bench that would be the envy of most of the Premier League. It also represented an ominous sign for any rival still harbouring title pretensions of their own. Kevin De Bruyne, who had missed the last seven matches with a hamstring problem, returned to a bench that included Sergio Agüero, John Stones and Fernandinho although Ilkay Gündogan was absent with the groin injury sustained in Saturday’s win over Tottenham.

The visitors dominated possession from the outset but met determined resistance from an Everton side who, as their manager readily admits, are more comfortable when forced to defend than when committing to an open game. Not that a Guardiola team usually allows an opponent the latter option.

The City manager doffed his beanie hat to Ancelotti as he walked across the Goodison pitch and into a long, animated conversation with the Italian before kick off. There was no deference from his players. Within seconds of kick off João Cancelo drifted forward from left-back into central midfield, where he remained for several minutes before forcing Pickford into the first save of the game with a dipping drive from 25 yards. The England goalkeeper was making his first start in five matches after recovering from a rib injury.

Everton suffered a fresh and early fitness setback when the commanding Yerry Mina was forced off with an ankle injury. The defender attempted to play on after lengthy treatment. While Mina did so, Rodri dispossessed Tom Davies and lofted an inviting ball over the Everton defence for Gabriel Jesus. The Brazilian forward blazed over under pressure from Michael Keane but with only Pickford to beat. The Colombian defender was immediately replaced by Seamus Coleman, who had quite the impact.

City opened the scoring from a corner, won when Keane made a vital interception to stop Jesus connecting with Riyad Mahrez’s cross to the back post. Mahrez had a second bite when Everton only half-cleared the resulting set-piece. Keane was again in the way, but his header dropped into the space where Foden lurked unmarked. The City playmaker, on target on the other side of Stanley Park earlier this month, drilled in a powerful shot that deflected off the inside of Coleman’s right calf and sailed past the wrong-footed Pickford.

Everton had shown only flashes of attacking intent with the game deadlocked and City controlling the play but improved immediately after falling behind. They levelled within six minutes courtesy of Richarlison’s first Premier League goal of the calender year. Not that he knew too much about it. Alex Iwobi released Coleman inside the City penalty area with a piercing pass between two defenders.

The Republic of Ireland international stood up a cross to the back post where Lucas Digne volleyed back across goal and against the post. The rebound sailed in off Richarlison’s thigh and, with two City players on the goal-line, there was no offside to spare the visitors.

The game reverted to type after the restart. City weaved their triangles and probed from all angles. Everton stood firm deep inside their own half. Pickford produced a fine stop low to his left from Bernardo Silva’s volley. Kyle Walker superbly picked out Jesus in space inside the area but, to Guardiola’s audible disgust, the striker who recently admitted his finishing had to improve blazed high and wide once again. Rodri then headed wide from Foden’s corner when, as his reaction testified, the midfielder should have hit the target.

But the pressure was mounting on the Everton goal and finally told when Mahrez produced the kind of trademark finish that defences always try to prevent, but are sometimes powerless to. Silva attacked from the right before rolling an intuitive pass inside for the Algeria international, who shifted the ball on to his left foot and curled an unstoppable shot around Pickford and in off the far post. Guardiola did not disguise his emotions on this occasion either. He roared with delight, leapt into the City dug-out and high-fived everyone in sight. - Guardian