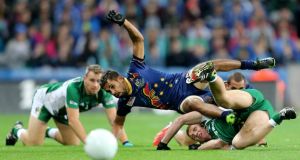 The scale of the challenge facing the GAA and AFL if their talks on reconstructing the international series are to succeed was graphically demonstrated on Saturday night at Croke Park, as Ireland made target practice of the visiting Australians to win the second Test by a breath-taking 79 points.

Adding to the debris was a host of records tumbling like masonry in an earthquake: highest score in a Test, biggest winning margin in both a Test and series (173-72) and the lowest aggregated attendance of any series held in Ireland since the internationals began nearly 30 years ago.

The wellbeing of the series has always depended on striking a balance: between legitimate physical aggression and violent indiscipline and between the aspects of the constituent football games that can best combine to provide attractive and competitive matches.

In the past two series the AFL have struggled to send out teams with the ability to match Ireland. It had been hoped that this year’s initiative of selecting an all-indigenous team would draw some inspiration from the cultural bonds of Aboriginal football.

Ultimately the playing pool, accounting for just about 10 per cent of AFL footballers, was too shallow. and the unavailability of the top players – Lance Franklin played just the first Test whereas former Australian captain Adam Goodes and test veteran Shaun Burgoyne had injury issues – was keenly felt.

Another procession
Persuading the AFL clubs to release their top players is the vital task facing the Australian administrators because if next year’s series – which appears certain to go ahead – turns into another procession the 28,526 spectators present at the weekend will have earned the distinction of being the last people ever to see the international series in Ireland.

In playing terms it was a pity for Paul Earley’s team that the occasion should turn out to be such a damp squib because even in the competitive vacuum it was possible to appreciate the quality of many of the team’s performances.

Captain, Michael Murphy had a cracking match. His ability to take high ball and establish attacking marks allied to his kicking accuracy made him second-top scorer on the evening but he also set up three of the goals. He had a prolific foil in Monaghan’s Conor McManus, who became only the second Irish player to score two goals in a Test since the series resumed and equalled Colm O’Rourke’s 29-year-old tally of 24 points in a single Test.

Seán Cavanagh has been Ireland’s best international player over the past 10 years and so it was fitting that he kicked the over, which took Ireland’s total into three digits for the first time – when Australia in 2005 became the only other team to reach 100, Ireland scored 64 in reply – to cap another fine display, including a skilful assist for Ciarán Kilkenny’s 31st minute goal.

Defensive base
Ireland attacked constructively and from a solid defensive base, as the Australians were unable to open up space with their kicking and unable to string together running moves. Their restarts were also a problem from the early stages and they were under immense pressure.

Aidan Walsh, Paul Flynn and Zac Touhy governed the approaches, cutting off attacks and moving ball forward whereas Michael Shields and Ciarán McKeever made attacking movement difficult even when the Australians could get possession closer to goal.

From the 27th to the 46th minute Australia didn’t mange a single score, during which period Ireland hit 25. When the impressive Ross Munnelly in kicked an over a few minutes into the second quarter on Saturday night, Ireland had already amassed more points than their opponents would manage over the entire match.

Australia got something from the final quarter when Eddie Betts and Jake Neade, who also scored one the previous week, forced in goals in successive minutes just after the hour.

They wouldn’t score again and Ireland simply ploughed on relentlessly, registering a further 21 points without reply.

It was obvious that Ireland would have been competitive against even the strongest AFL selection and simply a pity they never got the chance. Maybe they will next year.

* The Jim Stynes medal for the Australian player of the series went to Brisbane’s Ashley McGrath who filled the problem goalkeeping position for the AFL team and made a couple of excellent saves over the two Tests.