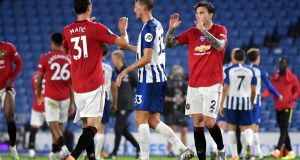 Civil War politics may have been put aside in the formation of the new government but this morning Seán Moran writes that there is a civil war brewing in the GAA as the association’s plan for a resumption of play could incentivise bad behaviour. The organisation are sticking with their statement that intercounty training will resume on September 14th despite plenty of rumours flying around that a number of teams are already training surreptitiously. “Then there are the ones who are minded to obey the rules but are being driven to neurosis by the strong suggestion that the other crowd are at it three times a week ‘down the local silo’,” he writes. Meanwhile, one team that is certainly in limbo is London who, despite the GAA now allowing club teams to engage in full contact training, cannot do so due to UK restrictions. This means they are hoping to start the club championship in September but that would leave little or no time for county preparations before they face Waterford in Division Four on October 17th or 18th. Meanwhile the Dublin hurling and football championships will continue with the draws as planned but there will be no promotion or relegation.

On to soccer and Manchester United showed some of their old swagger last night as a double from Bruno Fernandes and Mason Greenwood’s strike saw them easily cruise past Brighton. Earlier in the day reports had emerged that former United captain Roy Keane is in talks with the Azerbaijan FA about potentially taking the manager’s job but, as Emmet Malone writes, the rather strange link shows just how much Keane’s managerial fire has dimmed. Domestically there was good news yesterday as it was finally confirmed that the League of Ireland will resume on July 31st. However, it seems not everything is cleared up yet as some clubs feel aggrieved with the planned format, further underlining a lack of unity.