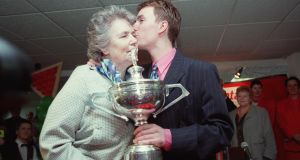 Famously, Rose Doherty, who passed away in 2017, was way too nervous to ever watch her son play, spending the night of the final out and about on her bike and, said Ken, “lighting so many candles she could have burnt five or six churches down”.

Her prayers were answered. “Maybe she’ll stop nagging me now about getting a proper job,” he said, having picked up a cheque for £210,000.

Rose, though, saw to it that Ken’s feet remained firmly pinned to the ground. A few days after the final, she had him delivering her apple tarts to the local shop first thing in the morning, him not having had much sleep. “Did you not earn enough from winning the world title,” he recalled being asked by puzzled passers-by.

So, no, he was never going to get too cocky. “Ken used to say he practised seven or eight hours a day, but if that was true, he’d have been a lot better,” as Rose said at the time.

Best of all was the time she had a quick chat by phone with this here paper, ending with her offering the reporter her son’s mobile number. The line broke up a little when she called out the final three digits, so she repeated them. “One . . . four . . .seven,” she said. “You know 1, 4, 7, the score Ken never gets when he’s playing.” Legend.

A quote from Ken

“I promised my mother that if I ever won the world title she could keep the trophy on top of the television, and that’s what she did. Every day she gave it a kiss and she kept shining it up so that it sparkled.” On presenting Rose Doherty with the mother of all ornaments.

0 -That’s how many players had won the World snooker title at junior, amateur and professional level before Ken Doherty achieved the feat in 1997.

In his press conference after winning the world title, Ken Doherty mentioned that he was a devoted follower of the Manchester United faith, and so nothing would give him a bigger thrill than to parade his trophy around Old Trafford. Not long after, he got a phone call from Alex Ferguson inviting him to do just that.

After meeting the players pre-match, and then watching the first half of United’s game against West Ham, Doherty was introduced to the crowd at half-time. As he told The 42’s Shane Costello a few years back:

“I walked around the whole pitch. I got to the West Ham fans and they started chanting ‘you’re just a shit Jimmy White’.”

You shouldn’t laugh - but no one laughed louder than Doherty himself.

A few days after Doherty’s triumph, Dermot Gilleece of this parish paid a visit to the family home in Ranelagh where friends and neighbours had gathered to salute the new world champion.

Among them, he wrote, was Sister Carina from the nearby Dominican convent.

“Seeing the trophy on the living room table, she touched it with her outstretched hand, saying: “Praise God and the angels. I stormed heaven for Ken. I’ve been 44 years a nun and God listens to the odd cry. Wasn’t it a wonderful thing that he did?”

Whether she meant God or Ken wasn’t made quite clear, but either way: divine intervention.

It was two years after he won the World Championship that Doherty first met his wife-to-be Sarah in a Dublin bar which, in his autobiography, he calls, eh, “Cafe Insane”. We’re guessing something was lost in translation and that it was, in fact, Café en Seine.

His opening chat-up line, he conceded, wasn’t exactly of silver-tongued quality. “It was two to three deep at the bar .... I looked around and there was Sarah, who is only five feet two. I turned to her and said, ‘you’re going to need a stepladder to get a drink in here’. Then I thought, ‘Jeez, what have I said?’”

She forgave him, though, and come December 2001 they were married in Australia. In what romantically named spot did the wedding take place? “Emu Bottom Homestead.... which doesn’t sound too great, I know.”

“I met the chief superintendent at the Mansion House for a reception, and he said to me, “You know something, Mr Doherty, from the hours of 7-10 pm, during the final session of the World Championship, there wasn’t one call into the central police station in Dublin. They thought there was something wrong with the phones. They rang up to ask if there was a problem, and the girl on the other end said, ‘Are you not watching the snooker?’ Even the criminals were watching it.”