Ireland lose hold on Six Nations, but may get handle on the World Cup 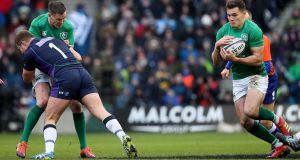 Ireland’s Jacob Stockdale breaks away for a try as Johnny Sexton gets tackled by Allan Dell of Scotland in their Six Nations round 2 match at Murrayfield. Photograph: Dan Sheridan/Inpho

Ireland’s hold on the Guinness Six Nations title slipped a little further on Sunday following England’s thumping bonus-point 44-8 win over France at Twickenham. That said, in some ways it could afford Joe Schmidt more elbow room to use this tournament in readiness for the World Cup.

Coupled with the failure to score a bonus-point try in the final quarter of their 22-13 win over Scotland, Ireland already trail England by six points in the table and thus require at least one if not two favours from others (most likely their Celtic cousins) if they are to haul in Eddie Jones’s rejuvenated team.

Wales, on eight points after wins in Paris and, last Saturday, in Rome, host England next Saturday week in what increasingly looks like both the pivotal and decisive game of the tournament. But even if Wales win, and Ireland win their remaining three games (including against the Welsh in the Principality Stadium on the final day) England would still be tough to overtake given they finish their campaign with home games against Italy and Scotland.

However, Ireland’s loosened grip on the title affords Schmidt and his assistants more scope to use this Six Nations to further ready the Irish squad for the World Cup, something that Warren Gatland openly said Wales were doing when making 10 changes for their victory over Italy.

Bearing this in mind, that Ireland were largely forced to make 10 changes for this game and then had to replace Johnny Sexton with Joey Carbery barely a quarter into the game was, admitted Schmidt, no bad thing.

“During the week I said if we’d never won one of these [Six Nations] before, we would be even more gutted,” said Schmidt in the aftermath of the win in Murrayfield.

“But we’ve done well in the Six Nations in the last five years so if it doesn’t come to pass this year there is a big thing at the end of the year for us,” he added in reference to the World Cup.

“Any time we get the opportunity to blend guys in and be forced to make late changes and be forced to kind of reconstruct what we do on the pitch, I think it helps vaccinate us against what happened last time,” said Schmidt in reference to the quarter-final defeat against Argentina when forced to delve deep into the squad.

“While no vaccination is 100 per cent, you are hoping that inch by inch you can get a little bit more comfortable and confident that people can step in and do a job.”

As it happens, of course, Ireland and Scotland meet each other in their opening World Cup Pool A game, which could go a long way toward defining their campaigns, in Yokohama on September 22nd, and Schmidt is already hugely aware of the threat posed by the improving Scots.

“We came here four years ago and won by 30 points. You don’t come here and get anything easy now. Since that win, I’m not sure that they have lost here. It’s one of those things that it’s going to be tough in that first round of the World Cup. Does it worry me? Everything worries me.”

Prior to this tournament, his counterpart Gregor Townsend had described last Saturday’s Six Nations meeting between the two teams as “a standalone game in a standalone tournament” and again sought to keep Saturday’s encounter in perspective.

“I was speaking to Andy Farrell before the game and we both said Yokohama feels like another world. We’ve got a pre-season, and a World Cup camp to get through. It’s the first game of the World Cup so how well you do in your camp, and how well you get your plays in place in those friendlies will have more relevance than this game at BT Murrayfield.”

Both will be grateful for a week’s respite before Ireland travel to Rome and Scotland to Paris for eminently significant games in their own right, where wins would also keep alive their outside hopes of the title.

I think we didn’t play with the fluency that we are capable of playing with. Now, part of that equation was the quality of the Scotland defence

As for last Saturday, Schmidt admitted that “there was a lot of anxiety going into this game”, what with the defeat to England and the enforced changes, which was compounded by the loss of Sexton after easing into a 12-3 lead and then conceding a try to Sam Johnson.

“Then it was tense,” said Schmidt, adding: “I think we didn’t play with the fluency that we are capable of playing with. Now, part of that equation was the quality of the Scotland defence. They got off the line and were incredibly physical.”

The head coach also accepted that Ireland’s kicking game was off, but although not many of his injured players are likely to be fit for the Roman expedition, he remained hopeful some of the team’s fluency will return.

“It has tended to in past championships. We have tended to be a bit slow starting. We had two tries in the first quarter. For me that’s relatively good reward and, you know, the set-play that we did score off, that needs a bit of fluency.”

“But then, when you lose your hub it is a big call to suddenly say, well, you are not going to miss a beat, and so we did miss a few beats and we did put a few passes down,” said Schmidt with regard to losing Sexton.

“Even then, twice Rob Kearney looked like he was almost away to score. He looked for Chris Farrell on the inside and if that pass goes to hand, Chris Farrell I think scores. We weren’t far away from breaking down what’s a really good defence. So I’m not distraught that we’ve got no options, I’m just frustrated. I’d like us to be creating more opportunities so we can capitalise on more of them.”