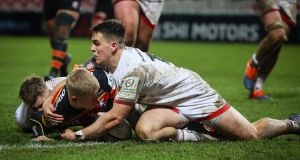 Nine tries and the last of them scored deep into injury time undid Ulster’s tilt at Europe for this season as they sank further in Pool B and away from the top four places that secure a quarter-final place. The Challenge Cup beckons.

Three of the nine scores were penalty tries, two for Gloucester and one for Ulster in a match where French referee Alexndre Ruiz send four players to the Kingsholm sin bin, three of those from Ulster, Rob Herring, Alan O’Connor and replacement Ethan McIlroy.

“I thought we played some really good stuff and got to 10 points up and then just decided that was the times to start giving penalties away and make the odd error, and piggyback them up the pitch,” said Ulster coach Dan McFarland. “They were always going to be a dangerous side, they score a lot of tries.”

The irony in that was Ulster had no yellow cards in their entire European campaign last season and at one stage in the 26th and 27th minutes two players, Herring and O’Connor, were watching as a 13-man Ulster held off Gloucester going into the half-time break.

The numbers won’t be kind to Ulster, 14 penalties conceded and a litany of missed lineouts as well as a Gloucester maul they couldn’t handle. Lacking grunt both Herring and O’Connor binned for collapsing the set piece as the English side rolled towards the line.

But the way it all ended was more cruel than it should have been after Ulster had pulled their way back into a match that at one stage looked to have gone beyond them as a lively Gloucester took a 24-10 lead.

But just past the hour Ulster had overhauled Gloucester after trailing from the sixth minute, when Welsh winger Louis Rees-Zammit bundled over in the corner. Billy Burns equalised minutes later as the Gloucester defence opened for him before Lloyd Evans and the first penalty try gave Gloucester a 17-7 lead, Ulster improbably closing that to 17-10 with just 13 players on the park.

After the half-time break an attacking lineout and drive allowed Mark Atkinson to score his try and the Evans conversion made it 24-10 for the home side before Ulster’s resurgence began.

Fullback Michael Lowry earned his first European try when Jordi Murphy and Nick Timoney punched up the centre in the 52nd minute, a penalty try on 58 minutes after Rees-Zammit slapped down an Ulster pass and a John Cooney solo effort from deep in the Ulster half after Jacob Stockdale had ripped the ball from Gloucester hands and Ulster led 24-34.

With just 12 minutes remaining an under pressure McIlroy was then binned for also slapping the ball forward and another penalty try awarded to Gloucester for 31-34 on 75 minutes.

In a desperate closing phase it was Gloucester who raised the tempo as Ulster wearied. Keeping the ball in hand, they finally stretched the province with the 20-year-old George Barton heroically taking his opportunity and first European try, the sapped Ulster team ending on their knees down and out after 85 minutes.

“It’s probably as dark a changing room as I’ve been in,” said captain Billy Burns. “But if that’s what it’s got to be to take lessons and move forward then that’s the way.”