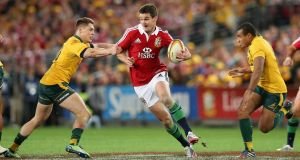 Just the type of back Gatland needs on a 10-match tour. An intelligent player, Payne can operate at fullback and outside centre although is picked as a centre and will particularly enjoy this one as he’s going home. Born in New Zealand, Payne is a slick operator who has good positional sense and generally makes the right play at the right time. To nail down a centre place on the Test team will be tough and to displace Stuart Hogg, the likely Test fullback, will also be a huge challenge. One of the surprise inclusions of this Lions squad.

Has quickly gelled with Garry Ringrose to form one of the most exciting young centre partnerships in these islands. A tough uncompromising inside centre, Henshaw has grown into a first Irish pick. He scored his second Test try in Ireland’s historic win over the All Blacks in Chicago and since then has grown into one of the leaders on the team. His awareness and sense of playing the position have also improved under Stuart Lancaster in Leinster and Joe Schmidt. He brings the sort of physicality Gatland favours. A Test possibility.

With Sexton a strong contender to be in the starting line up in the three Test matches. Murray’s growing confidence in the position makes him a decision maker and his physical presence also poses a threat. He was Ireland’s first choice scrumhalf for the last two World Cups and has brought his standout 2016 form into this year. It won’t hurt that one of his best games in the jersey was the win over New Zealand in Soldier Field in November. Had there been a fourth Lion’s Test in 2013 he would have started.

The 31-year-old Irish outhalf played in the 2013 Lions’ tour to Australia and made three appearances. His season to date has been fractured with injury but when fit and confident can be the most influential player on the pitch. He didn’t play in all of the Six Nations matches for Ireland but has always been a first pick for Joe Schmidt. His central role and influence at pivot and his willingness to shape matches has made him a regular target for most teams. A fit Sexton should play the Test matches with Murray.

A yard maker with ball in hand, O’Brien has come to symbolise the modern Irish flanker. The 30-year-old from Tullow made his Irish debut in 2009 and since then has been ever present in the Irish backrow. Picked by Gatland for the 2013 tour, O’Brien was a test starter and made two appearances against Australia. He returned from injury to become part of Ireland’s 2015 Six Nations winning squad and that year’s Rugby World Cup. A hugely dynamic player in wide channels with go forward ball and a possible Test player.

Furlong has had an outstanding season with Leinster and Ireland. The 24-year-old was first brought into the Irish set up by Joe Schmidt for the pre-2015 Rugby World Cup match against Wales, when he made his international debut. He was selected for the World Cup, featured in all three Tests of last summer’s tour and started against the All Blacks in Ireland’s historic win last November. His outstanding form and ability around the park has made him first pick for Schmidt and a favourite to be a Test match starter for Gatland.

The Irish loosehead prop has supplanted Cian Healy as the Ireland first pick for the position. Although former Lion Healy has had some serious injuries with a torn hamstring keeping him out for months, McGrath has used the time to earn game time and get better in the position. That in itself is a statement of how far the 27-year-old has progressed over the last 12 months. Another player people believe could make Gatland’s Test match team. A regular first hour performer for Joe Schmidt, he’s strong in the set piece and has improved in the loose.

Best was added to the Lions squad for the 2013 tour to Australia after English hooker Dylan Hartley was removed from the squad after receiving a red card in the Aviva Premiership final for abuse of referee Wayne Barnes. He was named Irish captain for the 2016 Six Nations Championship and is one of five Irish players to earn over 100 caps. Gets the heat if Irish lineouts go wrong as they did against Wales this year but a cool head and a player who has grown into the leadership role.

One of the consistently performing Irish players this season and selected as The Rugby Writer’s Player of The Year. A bruising ball carrier, Stander has demonstrated playing at blind side or number 8 that even against the best in the world he has a capacity to gain yards and cause threat to opposition defences. Born in South Africa, he is one of Ireland successful resident qualifications. But his swashbuckling style and his commitment to games have made him a crowd favourite as well as a coach pleaser. A tough challenge to break into the Test side.

When Leinster number 8 Jamie Heaslip pulled out of Ireland’s final match of The Six Nations with a back injury Peter O’Mahony stepped in and won man-of-the-match. A mongrel of a player in the best meaning of the word, O’Mahony has become an iconic figure in the Munster backrow for his commitment and aggression. Just the type of player to galvanise a team, Sky pundit and England World cup winner, Will Greenwood aptly summed him up: “If all the wild horsemen of the apocalypse came around the corner O’Mahony would charge straight back at them.”

A forward who can play in the second and backrow will be particularly useful to Gatland. Henderson also has a bit of dog in him around the park and is a powerful runner. Was a significant player in Ireland’s defence of their Six nations in 2015 and also at the RWC 2015 but he missed last year’s Six Nations through injury and has come back stronger this season. Competition to make the Test side will be tough but a few performances in the dirt tracker games against the non test sides and Henderson has the capacity to catch the eye of the coach.