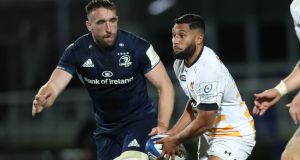 When Daniel Carter joined Racing 92 after the 2015 World Cup, he was treated like rugby royalty. He arrived in Paris to a fanfare, introduced on a prime time television show not as the world’s highest paid union player, as he had become with a contract in excess of £1 million a year, but one of the greatest of any generation.

The expectation was that Carter would dazzle in the Top 14 as he had for the Crusaders and the All Blacks, but the environments were markedly different. The signing was condemned by the Toulon owner, Mourad Boudjellal, as a triumph of commercialism over rugby: he should know given the number of southern hemisphere pensions he has boosted since resurrecting the Mediterranean club, but the Carter effect went beyond boosting Racing’s turnover.

They made two European Champions Cup finals in his three years there and won the Top 14, but Carter’s influence in a club that included five other former All Blacks was, if not muted, understated. Boudjellal’s point was not made out of mere jealousy: Carter had to adapt to Racing and French rugby, not the other way round.

“One of the biggest surprises I had when joining Racing was that everyone did what the coach said,” said Carter, in an interview with The Observer last summer. “In team meetings, players would not say a word … I had to bite my tongue. There was no awareness of playing what you see. My career has been about backing my instinct and being prepared to go against the gameplan.”

Boudjellal signed Carter’s fellow World Cup winner Ma’a Nonu at the end of 2015, but was soon complaining that he had expected more. The New Zealand wing Julian Savea has failed to make an impact at Toulon this season; all that is gold does not always glitter.

Lima Sopoaga’s arrival at Wasps this season was intended to mitigate the loss of Danny Cipriani, but the New Zealand outhalf has taken time to adjust to the Premiership, not helped by injuries to the players inside and outside him, Dan Robson and Jimmy Gopperth. He is further proof that it is unwise to expect an instant return from pedigree players when they are exposed to a distinctly different climate.

Such is the impact New Zealand have made at all levels of the game for so long that their players and coaches are always in demand. Pau thought they had signed Julian Savea’s brother, Ardie, after this year’s World Cup, only for the flanker to agree a new contract with the New Zealand Rugby Union, prompted by the neck injury suffered four months ago by the first choice All Black in his position, Sam Cane.

A number of New Zealanders will be off to Europe, including the experienced Ben Smith and Kieran Read. The latter, who has been lined up by Racing, makes commercial sense, like the Carter deal: All Blacks spend their careers having their playing loads closely monitored but in France they play even when not fully fit. It is Read’s presence and all that he stands for that Racing, settled into their new stadium, will look to exploit.

There have been a number of examples of New Zealand players who have successfully made the transition, notably Nick Evans at Harlequins. It is not so much how quickly they adjust but that they do. Carlos Spencer, another All Black 10, dazzled intermittently for Northampton and Gloucester, but was never going to bring the controlling influence Premiership coaches demand.

The same applies to coaches. Northampton raised eyebrows last year when they announced Chris Boyd was arriving from the Hurricanes, home of the Barrett brothers. A club that for a decade had been arguably the most structured side in the Premiership had turned into risk-takers.

Boyd said immediately on arriving in England that he would not look to turn the Saints into the Hurricanes, not least because the ingredients were different; evolution not revolution. New Zealand coaches who join clubs in the Premiership or Top 14 are confronted by something they have not experienced at home – a league in which there is relegation.

Northampton had signed the Wales outhalf Dan Biggar before recruiting Boyd. He is a contrasting 10 to Beauden Barrett, all competitive hustle and bustle and suddenly Northampton was not the club he had joined. Wales left Biggar on the bench for their major internationals last autumn in favour of the more attacking Gareth Anscombe, but Boyd is coaxing a different side out of the former Osprey.

Biggar has profited from having Piers Francis outside him, but the England international will be out for up to six weeks after suffering a shoulder injury during last Friday’s victory over Exeter. He may only miss one Premiership match with rounds of the Challenge Cup and the Premiership Cup taking up the rest of the month after this weekend, and the way the Saints are now using possession has helped them offset struggles up front.

Change takes time. It was hard not to feel for Sopoaga at Twickenham last Saturday, a marquee signing struggling to make his mark. He prefers to stand deeper than most Premiership outside-halves, but unless operating off turnover ball it makes the gainline harder to breach. He remains the player Wasps recruited, but with the Premiership campaign now at the halfway point and his side tumbling down the table, he needs to start emulating the good Evans.