Larmour has no time to rest on the laurels of 2018

In a World Cup year, back must continue to clear every hurdle on the road to Tokyo 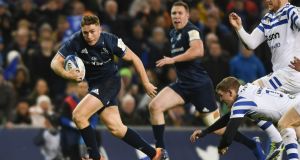 Jordan Larmour in action for Leinster against Bath. “Growing up, all I wanted to do was play for Ireland and Leinster. I still have a good bit to learn.” Photograph: Artur Widak/PA

Like an acquired skill, it is a kind of locked in syndrome, of never, ever being too far away from the moment or what is coming up next. Sometimes looking too far ahead and players can become lost in the distance.

Ulster this week, then Europe with Toulouse and Wasps, the Six Nations and a World Cup that with each passing month consumes thinking, Larmour is in that space where he has whoa factor with Ireland but . . .

Even after “a pretty special year” just gone, last week’s Keith Earls and Andrew Conway and this week’s Jacob Stockdale remain, as he is to them, clear and present threats.

“I would say I need to work on parts of my game,” he says self-critically. “But if I was to pick out a few I would say my kicking, my high ball catching, those are two areas I can bring up. I do think they have gotten better.”

Last summer Larmour watched the two shootouts and semi-final involving the Irish hockey team at the London World Cup. He played Under-16 hockey for Ireland. Chloe Watkins was a few years ahead of him in St Andrews School. Watkins scored the final goal in Ireland’s shootout against India, flung her stick on the ground and sprinted across the pitch. That was her. A thousand tears.

Over Christmas Watkins was hit by a car. It struck her hip, threw her into the air and she landed on her shoulder. Her head didn’t hit the ground and nothing was broken. Bruised, she is back training as if still riding on the good vibe of the summer.

For Larmour, Watkins and the women have shown that the poor World Cup DNA Irish rugby has inherited need not be an everlasting curse of nature, although, already he understands that whatever else may fall Ireland or Leinster’s way, Tokyo will be the making or breaking of Irish rugby this year.

“That will be the main mindset, to try and play our best and win every game. I don’t think we will be thinking ‘oh no, we are going to lose here’.

“Yeah, I knew Chloe Watkins. Their [Ireland] coach, Graham Shaw, used to coach me in hockey camp when I was younger,” he says.

“The girls did unbelievably well. It was another great day for Irish sport. I watched the penalty shootouts and the semi-final. It was cool. Everyone got behind them so it was pretty special.

“If you put your mind to anything you can do well. They had a goal. They wanted to go out and win the World Cup and they got pretty close. It shows if you put hard work in, put your head down, you have a goal in mind you can go out and achieve it.”

Larmour wants to start in the Six Nations. “What player doesn’t?” he says. He says that in these interprovincial matches, players are looking at each other for form and impact. There is a sizing up of the direct opposition, in his case at fullback and wing.

Earls intercepting Ciaran Frawley’s pass and galloping away to cap Munster’s win in Thomond Park was a timely reminder. But he hasn’t dwelled on the year just gone. It has been too busy. Far from slowing down or stopping at the seasonal turn, events have accelerated so much that New Zealand and a Grand Slam are memories still in cold storage.

Larmour sped through the year, rarely pausing and making his Ireland debut in February, when he came on as a replacement in the 56-19 win against Italy in the Six Nations Championship. In November he again played against Italy in Chicago, scoring three tries and winning man of the match.

“Looking back, getting my first caps was the highlight for me,” he says at the launch of his role as Energia Ambassador. “Growing up, all I wanted to do was play for Ireland and Leinster. I still have a good bit to learn.

“I am kind of in the thick of it. You are kind of just going about it. Trying to play well. Be involved in the big games. Going with the flow.”

The wheels are still spinning. But he out jumped one of his favourite players, Israel Folau, for a high ball in the third Test against Australia last June. Happy emoji. That too is parked. On ice with all of 2018.