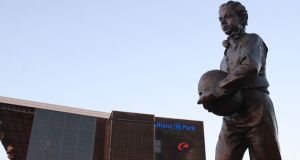 The Webb Ellis statue at Allianz Park. Saracens have been deducted a further 70 points to ensure they finish bottom of the Premiership. Photo: Adam Davy/PA Wire

Saracens have been plunged deeper into turmoil after they were docked a further 70 points to ensure they will finish bottom of the Premiership table, just hours after their interim chief executive, Edward Griffiths, resigned with immediate effect less than a month into the job.

Griffiths returned to the club in early January, having spent six years in the role up to 2015, to try to steer Saracens through the salary cap scandal. He was initially appointed for 12 months but has lasted just 26 days, during which time the club were condemned to relegation from the Premiership.

On Tuesday night Premiership Rugby moved to cement Saracens’ relegation by announcing changes to its salary cap regulations, enabling it to deduct Saracens a further 70 points on top of the 35 they were docked in November.

It ensures Saracens will finish bottom of the Premiership and avoids a difficult situation if they had managed to achieve a top four or top six place. The Premiership table now shows Saracens as sitting in 12th place with a points total of -77.

The move comes after consultation with the Rugby Football Union, whose chief executive, Billy Sweeney, said in a statement: “We support the views of Lord Dyson regarding Saracens’ salary cap breaches in previous seasons. We note from the judgment there is no evidence to suggest that the players were complicit in any of the club’s actions. We have been in dialogue with Premiership Rugby regarding the further deduction of league points, which provides greater certainty for clubs, supporters and the wider game.”

Griffiths’s shock departure comes just five days after it emerged the England and Wales Cricket Board were investigating him amid allegations he had worked as an unregistered agent. Saracens however, have denied the investigation precipitated Griffiths’ departure. “This was always going to be a very short-term appointment, and others are well-placed to drive forward the rebuilding of the club,” Griffiths said.

Griffiths’s return to Saracens marked a change in the club’s position towards being found guilty of breaching the salary cap. When Premiership Rugby first announced that the champions would be fined £5.36m and docked 35 points in November, Saracens reacted angrily and pledged to appeal against the sanctions.

Shortly after his arrival however, Griffiths admitted Saracens were on course to breach the £7m salary cap and after failing to offload any of the club’s lucrative earners, coupled with the refusal to open their books for a forensic mid-season audit, their relegation was confirmed.

The two changes to the salary cap regulations have been made with that refusal in mind. Premiership Rugby now has greater power to force a club to open its books and can deduct 70 points if it does not comply, though the fact that the legislation has been changed now, after Saracens’ relegation had already been confirmed, does little to detract from suggestions the league is making things up as it goes along.

While Premiership Rugby has opted to make mid-season changes to its regulations, it has decided against any amendments which would see Saracens stripped of the titles they won when in breach of the salary cap.

Griffiths, meanwhile, is unlikely to be missed by his rivals. It is understood his return to Saracens did not go down well among other Premiership clubs and while he was not at the club for the three seasons in which they have been found guilty of breaking the salary cap, he was at the helm when Saracens were accused of failing to open their books for an investigation into the 2013-14 season.

That eventually led to a secret compensation deal which angered a number of their rivals.

Griffiths’ return to Saracens coincided with the appointment of Neil Golding as the club’s independent chairman, following Nigel Wray’s decision to step down. In a statement, Saracens said on Tuesday that the process to appoint a “long-term CEO” had begun. Golding added: “The club is very grateful to Edward for temporarily stepping away from his other commitments to provide significant assistance during a difficult period, and wishes him well in the future.”

Meanwhile, Griffiths has stated that he is “very happy to cooperate” with the ECB over its investigation into his activity with Middlesex cricket club through his sports agency ASM. Last week he said: “I am not an agent, I have never acted as an agent and I have never received a commission to work as an agent.” – Guardian