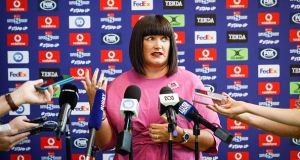 Rugby Australia are seeking a new chief executive to replace Raelene Castle, she quit last month saying she believed the board wanted her out. Photograph: Getty Images

Rugby Australia (RA) director Peter Wiggs has resigned after less than six weeks in the role amid reports of disharmony on the board as the embattled governing body seeks a new chief executive to replace Raelene Castle.

Private equity manager Wiggs had been endorsed by influential backers in Australian sport to replace RA chairman Paul McLean, who is due to step down in July.

However, local media reported on Tuesday that his attempt to push through the appointment of Australian Olympic Committee (AOC) chief executive Matt Carroll to replace Castle without a recruitment process did not sit well with other directors.

“Peter has decided to step down from the board and I understand his reasons,” McLean said in a RA statement on Wednesday.

“He has undertaken some very important work and has made a valuable contribution to the organisation, in a very short time, and we are thankful for his contribution.

“The immediate priority of the board is to install a replacement for Peter, and an interim chief executive. I will provide an update on those matters at the appropriate time.”

Rob Clarke, who has held the top job at two of Australia’s Super Rugby teams, was appointed interim chief executive later on Wednesday but made it clear he was not interested in the job on a permanent basis.

“The game is facing some unprecedented challenges and ... I want to see Australian rugby get through this and emerge on the other side with greater certainty and a positive outlook,” he said in a statement. “I will not be entering the process for the permanent role.”

RA is battling a financial crisis amid the Covid-19 pandemic, with uncertainty over future revenues due to the suspension of all rugby in Australia and other nations.

Carroll signalled that he was not interested in the RA role on Tuesday, saying in a statement that he was focused on his work at the AOC.

New Zealander Castle quit last month after nearly three years at the helm, saying she believed the RA board no longer wanted her in the role.