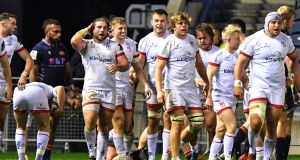 Ulster maintained their unbeaten start to the season with an eighth successive victory and in doing so climbed above Leinster - the Pro14 champions have played a game less - at the top of Conference A.

A hat-trick of tries for hooker John Andrew, two for John Cooney as well as those from Stewart Moore and Jordi Murphy guaranteed the bonus point win. Edinburgh did claw their way back to 19-14 having dominated the third quarter and also had a try disallowed but that post interval momentum eventually petered out.

The former Ireland Schools 100 and 200 metre sprint champion Aaron Sexton wouldn’t have envisaged his debut at quite such an early stage but he was summoned on eight minutes following an injury to the luckless Rob Lyttle. He didn’t receive a pass in space.

The visitors enjoyed a bright start on two minutes working hooker John Andrew into space on the touchline and his inside pass found John Cooney who sent centre Stewart Moore over for his third try of the season.

Marcell Coetzee was exceptional in everything he did, carrying and forcing turnovers at the breakdown to highlight a couple. Ulster’s lineout maul was the conduit for two tries in a five minute spell, the first scored by Andrew, the second a smart finish from Cooney, spotting a gap to squeeze over from close range. The scrumhalf managed to convert his effort to push the visitors into a 19-0 lead.

A few errors crept into Ulster’s play and this gave Edinburgh cheap field position and possession from which they managed to harvest seven points through Jack Blain’s try and a Nathan Chamberlain conversion.

The home side trailed 19-7 at the interval but within four minutes of the resumption they cut the gap further with Blain’s second try, which Chamberlain improved upon.

Edinburgh had a try disallowed correctly for offside and Ulster made the most of the respite when the lineout maul provided the platform for the bonus point try, scored by Jordi Murphy. Edinburgh replacement Bill Mata received a yellow card for infringing in the build-up.

Ulster crossed for the fifth on 67 minutes, Ian Madigan’s break and gorgeous offload sent Sam Carter away and the Australian timed his pass nicely to Cooney with the scrumhalf outpacing the cover. His conversion was the last act, replaced by Dan Shanahan, one of several changes made by Dan McFarland at that point.

Andrew’s second try of the night, was followed by his hat-trick in injury time, a fitting epitaph for his and Ulster’s performance on the night.