It’s one thing looking blunt against England, another altogether against Georgia 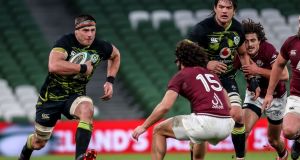 CJ Stander comes up against Georgia’s Soso during Ireland’s victory at the Aviva Stadium on Sunday. Photograph: Dan Sheridan/Inpho

Moving into the 80th minute of Sunday’s game at the Aviva Stadium, Ireland had one last chance to redeem something from a drab second half which had seen them share six points with Georgia.

Their 16th lineout of the day produced clean ball for the 16th time (much of it, admittedly, unchallenged). As they’d done once in the first half, there was a variation from the catch-and-drive as Peter O’Mahony’s clean take was transferred to Iain Henderson and on then for CJ Stander to come charging around the tail.

Chris Farrell was alongside him. Had the blindside winger and Stuart McCloskey come as further options it would probably have been a simple score. Instead Stander put his head down, charged into contact and was held up over the line.

Still, a scrum offered another opportunity. This time, off that rarity in the game by the name of quick scrum ball, Stander picked and charged into contact again, with ne’er a hint of an option or even a decoy, and he was actually bumped backwards by a Georgian centre.

From the recycle, Ireland went back to route one, namely one-off runners. O’Mahony was driven back and John Ryan was held up but from this recycle Ireland had a five on three, with O’Mahony and Shane Daly running trailers and Hugo Keenan hugging the touchline. Instead, Stander, with his 23rd carry of the day, went into contact again and the Georgian replacement winger David Niniashvili earned another turnover penalty at the breakdown for the Lelos.

It seemed to sum up Ireland’s increasingly blunt second-half performance.

It’s one thing looking blunt against England, another altogether against Georgia even if we do them a disservice here

Yet the first-half display had actually been quite good, with much better shape, options, accuracy and variety to Ireland’s attack in the lead-up to Billy Burns’ first Test try and two ensuing penalties. Jacob Stockdale had kicked one chance away after his own counter had created a two-on-one with Keith Earls on his outside but otherwise Ireland made all their attacking forays into the Georgian 22 tell.

As well as taking the ball to the line, Burns also held his depth when Farrell pulled the ball back for his try, and Stockdale demonstrated their Ulster understanding with a lovely left to right pass for Keenan’s try.

The passage of play after Keenan retrieved a bouncing box kick which went wide right to Stander before Farrell filled in at scrumhalf and James Ryan pulled the ball back for Burns to hit Stockdale again was excellent. So too was Stockdale’s pass for Stuart McCloskey’s fine finish from half-way, if harshly adjudged forward by the fussy Mathieu Raynal. Then, in one of Raynal’s more infuriating performances, for reasons best known to himself he quickly adjudicated Ryan who had been held up over the line when the Irish captain had clearly scored and implored the French referee to go upstairs.

So a half-time scoreline of 27-7 would have more accurately reflected Ireland’s performance. It could have been 34-7. Quite how that became 3-all in the second half is worrying. It’s one thing looking blunt against England, another altogether against Georgia even if we do them a disservice here. They had shown themselves to be well-organised across the pitch in defence and strong in contact against England and especially Wales, and were always likely to improve for their two previous outings after one game in nine months for their home-based players.

Ireland did lose Burns within five minutes of the restart but that doesn’t explain why the carriers increasingly resorted to taking the ball straight into contact, with little footwork or attempts to find soft shoulders.

In a repeat of a flaw identified by Ryan after the Twickenham defeat, the carriers also started to become too “chesty”. Two examples of this, by Farrell, led to slow ball and a turnover penalty, as then was the case with Stander and McCloskey, and all of this led to breakdown issues in recycling quick ball.

Handling errors also crept into Ireland’s game, which became more wasteful. Ryan and Will Connors didn’t execute tip-on passes, a Conor Murray offload went forward in the tackle in what was admittedly a rare blemish in his display, and Connors was several metres offside in chasing the pre-planned Ross Byrne chip off a scrum.

Their kicking game also went off; McCloskey kicking turnover possession away in contrast to his perfectly executed long diagonal touch-finder in the first-half and Stockdale grubbering over the dead ball line, although at least Byrne’s angled grubber found the right side of the corner flag.

The players have been given more freedom to seek out space and exploit it, to have – as the head coach puts it – the courage of their convictions

Their frustrations grew. You could also see it in their facial expressions, which became increasingly more strained and, at the full-time whistle, they virtually looked like a beaten team.

The harder they tried, the more hurried they seemed to become as the second half wore on, which perhaps demonstrates a lack of confidence or belief at the moment in what they are trying to do, especially when in the opposition 22. It seems as if this is becoming an issue.

So too the fall-off in performance levels in the third quarter. This has become a recurring theme, which was even the case in an otherwise commanding win over Wales. Clearly something is being lost in translation, be it during the week and/or during the interval.

The tenor of the regime has, understandably, changed. It couldn’t be more of the exact same again. Andy Farrell has sought to generate a more relaxed and expressive environment. The players have been given more freedom to seek out space and exploit it, to have – as the head coach puts it – the courage of their convictions.

But perhaps, to rediscover more self-belief and sureness in what they are doing, they could do with a little more of the old detail.