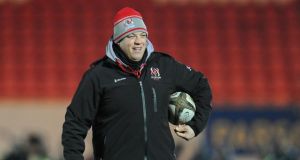 Ulster’s head coach Jono Gibbes: “The decision to leave here is a difficult one professionally because I support the team and the staff, and I am excited for what the future holds for them.” Photograph: Kevin Barnes/Inpho

It’s been an annus horribilis for Ulster rugby on and off the pitch, and one that shows no sign of abating following the news that head coach Jono Gibbes is to step down from that role at the end of the season to return to New Zealand.

This follows on from a decision by the high regarded Les Kiss to leave his position as the province’s director of rugby in January by mutual consent, and the continuing absence of several high-profile players for a variety of reasons.

Tommy Bowe has announced that he will retire at the end of the season, while a Kingspan stadium favourite fullback Charles Piutau leaves to join Bristol in the summer.

Ulster, Ireland and Lions colossus Iain Henderson has yet to sign a new contract – it expires at the end of the season – and persuading him to stay will be arguably as important as whoever succeeds Gibbes.

Since Brian McLaughlin’s contract was not renewed after leading the province to a Heineken Cup final defeat by Leinster in 2012, Mark Anscombe, Neil Doak, Kiss temporarily and Gibbes have all had a go as head coach, while David Humphreys and Kiss have occupied the director of rugby position.

There had been recent speculation linking Gibbes to a position as forwards coach with Australia, thereby renewing a coaching partnership with Michael Cheika, the Wallabies head coach, that dates back to their time at Leinster during which the duo led the province to a first Heineken Cup success in 2009.

However, Gibbes has indicated that he is returning to New Zealand rather than undertaking a new rugby assignment in Australia.

“Being a long way from home for the last 10 years [he had stints at Leinster, Clermont Auvergne and Ulster] has made me prioritise things above my career, and so I’ll be returning at the end of this season for family reasons.

“The decision to leave here is a difficult one professionally because I support the team and the staff, and I am excited for what the future holds for them. I believe there are enough passionate and professional people involved to build on the existing strong foundations of the club.

“The challenge ahead for Ulster demands the full attention of everyone involved; the management group, the team, the coaches and support staff. It is exciting and achievable. However, I cannot in good conscience provide my full attention for the journey ahead.”

The IRFU’s David Nucifora and Ulster’s director of operations Bryn Cunningham will be working closely to fill the vacancy, with the latter admitting: “A review of the coaching structure is ongoing, and the desired outcome of this will be to provide us with a strong, well-balanced coaching team, and some long-term stability.”