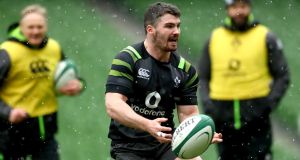 Sam Arnold: “I might not have the Irish accent but I would do absolutely everything if I did get the opportunity to wear the jersey.” Photograph: James Crombie/Inpho

Much like the bread shelves in the supermarkets these past few days, Ireland’s midfield cupboard is looking increasingly bare, but Joe Schmidt is continually replenishing his stocks, witness the uncapped 21-year-old Sam Arnold taking a full part in Tuesday’s open session.

Ironically, the session had barely finished when Chris Farrell, the 15th centre to be used by Schmidt across 24 different combinations, was diagnosed with knee ligament damage and ruled out of the remainder of the Six Nations in addition to Robbie Henshaw and Jared Payne.

Garry Ringrose looks certain to step back in, but Arnold is inching closer, as much through his own ability and form. Chosen by Brian O’Driscoll as man-of-the-match on his European Champions Cup debut for Munster against Leicester at Thomond Park in December, Arnold had already trained with the Ireland squad in Spain before the Six Nations.

“I think for Joe to ring me up and tell me he wanted me to come in, it does give you that kinda lift that you might not be too far away and it stays in the back of your head that there might be a sniff sometime in the future if you keep working hard.

“Obviously I’m just trying to learn as much as I can. It was a tough session out there with the 20s, just trying to make that decision-making under fatigue is the one thing I really found a step up today. So I’ll go back to Munster and work on that in training, work on making good decisions under fatigue and getting better at that if I can.”

“But I’d have grown up always watching Drico, Gordon D’Arcy, them guys, and ever since I did the Irish (Exiles) stuff at 16, I haven’t wanted to play for any other country. I might not have the Irish accent but I would do absolutely everything if I did get the opportunity to wear the jersey. I would be incredibly grateful, and I’d give it everything I had.”

Born and raised in London, he played soccer and ran the 100 metres, before being awarded a rugby scholarship to attend Cranleigh in Surrey where director of rugby Andy Houston became a mentor.

Harlequins were keen to bring him into their academy, but as a scrumhalf. Having played for the Ireland Under-18s and under-20s, he opted for Ulster in 2015 before relocating to Munster at the start of last season.

Alas no sooner had he joined Munster than then he did his posterior cruciate ligament, delaying his debut until November, whereupon a medial ligament injury in January sidelined him for another eight weeks, while a calf injury delayed his start to this season. Hence Arnold is now just delighted to be playing and injury free, while also acknowledging the role Felix Jones has had on his further development.

“He has been absolutely incredible. There has not been one training session where Jonesey has not stayed out with me, called me aside and I have asked him to do a bit of kicking, a bit of passing, a bit video analysis. He is always ready to go the extra mile, and he has been superb in helping the young backs coming through, like Alex Wootton, Dan Goggin, Darren Sweetnam. He is absolutely awesome and I think he takes pride in seeing his young backs trying to push on.”

However, Arnold’s red card over the festive period against Ulster and three week suspension interrupted his season once again.

While his chance might not come in this Six Nations, days like last Tuesday strengthen his desire to one day play for Ireland, and perhaps set his sights on the summer tour to Australia.

“I want to play for Ireland, that’s no secret, but to be honest a couple of years ago I tried to look ahead, probably too far ahead, and it didn’t work out for me. I think you kind of lose a bit of composure and focus, and you kind of deviate from your goals. The main thing for me is breaking it down into mini-cycles, one week at a time, try and get better every week, and see where I end up.”