Ulster are worthy winners over Connacht to reach semi-finals

Rory Best says goodbye to the Kingspan as a player, but his Ulster days aren’t over yet 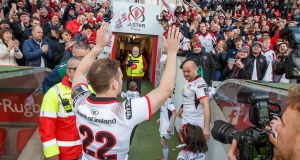 Ulster’s Darren Cave and Rory Best leave the field after their win over Connacht at Kingspan Stadium. Photograph: James Crombie/Inpho

The scoreline certainly doesn’t flatter Connacht, who gave it their all in a throbbing and vibrant Guinness Pro14 quarter-final, but Ulster were worthy winners in earning a difficult semi-final away to Glasgow next Friday week.

With the home crowd in full voice, no doubt the home team were equally determined to ensure a winning last performance for their legendary captain, Rory Best, and Darren Cave at the Kingspan Stadium.

They brought that little more energy and physicality, and as one suspected Marcell Coetzee again showed his worth with a titanic amalgam of big carrying - there were 24 of them for 36 hard earned metres - and big hitting amongst his 14 tackles.

Iain Henderson, with 17 carries wasn’t far behind, and Stuart McCloskey also had a big game in midfield, while Michael Lowry was a livewire from the back.

Connacht’s main ball carrier was Colby Fainga’s, with 12 carries. They defended wondrously, and always looked capable of striking stealthily, but Ulster repelled them with several defensive sets (Eric O’Sullivan putting in a big shift as usual) as both sides recognised the threat posed by the other.

Ultimately though they were left to work off comparative scraps - Ulster having over 60 per cent of the possession and the territory - thanks in part to their poor exits and ball retention.

The sun shone again just before the teams also returned for the kick-off, the atmosphere and sense of anticipation heightened by a sizeable Green Army from the west, which must have numbered close to a couple of thousand. But of course, the biggest cheer and a standing ovation greeted the announcement and sight of Best leading Ulster out for the last time at the Kingspan Stadium.

Setting the tone for the game, the breathless opening passage of play lasted fully three minutes 50 seconds as Ulster twice ran back kicks from hand by Jack Carty and Tiernan O’Halloran. Stuart McCloskey and Marcell Coetzee both broke tackles in helping to generate Ulster’s high tempo before Colby Fainga’a was penalised for playing the ball after the ruck had formed and John Cooney landed the penalty against his former province.

Connacht responded well off a couple of line-outs, but Fainga’a couldn’t hold on to an offload by Bundee Aki and when O’Halloran knocked on an up-and-under by Cooney, Ulster were on the front foot again. Using the full width of the pitch, successive offloads in the tackle by Coetzee - Stephen Fitzgerald shooting up to leave a gap - and Kieran Treadwell releasing Nick Timoney for the former Irish 7s player to step the covering Matt Healy and score. Cooney missed the conversion.

Ulster were full value for their 8-0 lead, but Connacht again responded well. Dave Heffernan was hauled down just short of the line after a cleverly worked line-out which returned the ball to him for a dart up the line. However, Ulster held firm with two strong defensive sets, Ultan Dillane and O’Halloran losing the ball in contact, although the latter was entitled to question John Lacey’s call after Robert Baloucoune made a good read.

Dillane and Fainga’a did well in contact to dislodge the ball from McCloskey, and then produced a lovely strike move off the scrum. Tom Farrell trucked it up but pulled the ball back for Carty to float a superb floated pass for Healy to beat Baloucoune on the outside and step inside Michael Lowry before the covering Luke Marshall brought him down. A couple of recycles later, Tom Farrell almost squeezing through, ended with McCloskey going over the top for Carty to open Connacht’s account.

In between them stealing two attacking throws by Best, Connacht lost the influential Gavin Thornbury, who was helped off and then taken to the dressing room in a motorised stretcher. The visitors also began to show some frustration with Andrew Brace’s procession of penalties after McCloskey was not penalised for coming around the side of a Connacht maul.

Aki was then pinged for a high hit on Burns, when the latter dipped low into the tackle, with Aki also stooping. The crowd wanted more, but a yellow would have been excessive. In the event, Cooney - who himself had passed an HIA - closed out the half with the ensuing penalty to make it 11-3 at the break.

Lowry countered again on the restart from another loose kick, offloading to McCloskey, but Connacht put in a good defensive set, only to waste a good line-out from Dillane a the tail on half-way when Kieran Marmion opted to feed Healy on the blindside and he was tackled into touch by Cooney, to approving chants of his name by the home crowd.

However, a good kick in behind by Carty off a scrum and a line-out maul led to a penalty when it was pulled down, but Carty hooked his angled 40 metre penalty. He had a better connection with a penalty to touch from half-way to 15 metres of the Ulster line, as a huge cheer greeted the arrival of Cave as a temporary replacement for Luke Marshall.

When Coetzee stopped Farrell off Carty’s inside pass and Best then ripped the ball when Carty was isolated, the decibel levels went up.

It felt like a big momentum shift, all the more so when Cooney sniped off Ulster’s line-out maul, fending off Fainga’a, but instead Carty read and came up with a huge intercept. By rights too, they should have had a penalty under the posts for Henderson tackling Carty late.

The game was now swinging wildly, McCloskey charging off a turnover before Fainga’a read a loose pass by Burns for another intercept, running upfield an d chased down by Balloucoune before offloading one-handed for Aki to avail of Balloucoune and Cave bumping into each other to finish gleefully from 30 metres out. Carty’s conversion made it a one-point game.

But a chargedown by Henderson, followed up by Coetzee winning the ball on the deck, had them hammering at the Connacht defence again. When Eoghan Masterson was pinged for not rolling away after a strong carry by Henderson. Before Cooney’s penalty made it 14-10, Aki departed, returning the applause of the Connacht supporters, as he played the pantomime villain to the booing Ulster fans, before then embracing Marshall as he returned to the pitch.

When Coetzee was then penalized for not rolling away after a strong carry by Butler, Carty’s 30 metre penalty made it a one-point game.

Best’s 69th minute departure prompted a huge, thunderous ovation Ulster seemed to be wavering when Burns sliced out on the full, but responded with another big defensive set of their own on half-way with Henderson winning a penalty in the jackal, only for Rob Herring to miss his first throw.

Even so, following a poor exit kick by Carty, the Connacht out-half couldn’t gather a probing kick in behind by Marshall under pressure from Lowry, only for the covering Healy to prevent a try, albeit at the expense of a line-out.

McCloskey and Cloetzee were again to the fore as they hammered through multiple phases, before the latter beat the tackles of Eoin McKeon and Farrell as Connacht’d defence finally wilted. Burns’ conversion, from about seven minutes in from the touchline sealed the deal.

Only then could the vast majority in the near 16,000 crowd ‘stand up for the Ulstermen’ as the white flags were waved and the home side ran down the clock. A thunderous roar greeted the final call on this thunderous game.

Those that hung around chanted Best’s name and returned the players’ applause on the home side’s lap of honour. This was goodbye to the Kingspan as a player, but you always felt his farewell would charge the home team and crowd alike. That it did, and so his Ulster days aren’t over yet.

1 England 24 Ireland 12: How the Irish players rated at Twickenham
2 Eddie Jones’s comments have already provided Irish team-talk for 2021
3 Ireland suffer Twickenham torture yet again as England dominate
4 TV View: Sunday Bloody Sunday . . . Not Bono’s fault but Boy, that was Bad
5 England held all the aces in defining battle of the breakdown
Real news has value SUBSCRIBE