Angus Lloyd taking every chance as he pursues rugby dream 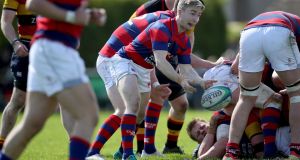 Angus Lloyd in action for Clontarf against Lansdowne during the All-Ireland League Division 1A semi-final at Castle Avenue. Photograph: Dan Sheridan/Inpho

Have boots, will travel. For a 26-year-old, Angus Lloyd has certainly been around the block, the former Leinster under-19 and under-20 scrumhalf this season completing the full provincial cycle on a short-term deal with Connacht.

And this while studying medicine in the College of Surgeons and also helping Clontarf to this Sunday’s All-Ireland League final against Cork Constitution at the Aviva Stadium (kick-off 3pm).

It’s been some juggling act, particularly of late, before he reaches some semblance of normality next season when he takes up his full-time deal with Connacht while completing his final year at RSCI.

“It’s getting there. The next couple of weeks will be bad. We’ll see if I survive the next five or six weeks,” he said in reference to his upcoming exams.

“For it to work, both Connacht and Surgeons have to be flexible. It’s a lot to ask of both. Basically, what I was doing with Connacht was: if I made their 23 I’d have to stay with them all week.”

Helpfully, his final year studies will all be placement work.

“Next season, I’m hoping to get half my placements in Galway. So that will help.”

Even so, after trying his luck with both Ulster and Munster previously, if the RCSI hadn’t been agreeable, Lloyd wouldn’t have taken up Connacht’s offer.

“From my experience of it last time, it’s just very fickle. So it wasn’t worth putting everything on the line, taking another year out of medicine, so I just want to get medicine done. Connacht have been very flexible and so have RCSI, both of them have been amazing. It will be tough, but I think it’s doable.”

Lloyd has already had something of a well-travelled career, for he was also the Division 1B player of the year when helping Trinity to promotion three seasons ago. He joined Ulster on a development contract at the start of the ensuing 2016-17 season before relocating to Munster on loan, winning his first cap against Treviso at Thomond Park.

His contract with Munster was extended until the end of the 2016-17 season, and he actually scored a try against Ulster in a 22-20 victory in April 2017 when a late call-up for Duncan Williams. Last December he joined Connacht on a short-term deal which has since been made permanent.

He had never given up hope.

“I thought I was good enough to do it. And was I going to get another look? I didn’t know.”

“I was pretty content with sticking with medicine, but if the opportunity arose and everyone was flexible I’d definitely take it, which it has. I got a three-month contract off Connacht, went down and gave it a stab as best I could. Luckily enough I got something off the back of it.”

Looking back on his first foray into the professional ranks, Lloyd says: “I loved it. When I first started with the pre-season in Ulster, it took me a bit of time to acclimatise to the speed of the game. It’s definitely a bit quicker and more physical for sure. But by the time I got down to Munster I was pretty much up to speed.”

His opportunity took a while.

“It just happened in a week – Conor Murray did his shoulder [against Wales]), Abrie [Griesel] tore his cruciate and Duncan Williams got a vomiting bug. I was the only one left, so they had to play me. Played well, got a few opportunities, two starts in the end of season interpros. It went well, but it was too little too late. They had James Hart coming in and, in hindsight, Rassie was on the way out.”

In switching from the AIL to Connacht, Lloyd is taking a well-trodden path which highlights how the western province keep a close tab on the club game.

“They rang me out of the blue one day. I had an agent who had been in contact with them in the past, but we didn’t ring Connacht up saying ‘I’m here’. When these injury situations happen and they’re under time pressure to get someone in, provinces do look to the AIL. When they have a bit more time they’ll look further afield, but in the short-term they definitely do look to the AIL.”

As well as playing for Ulster (once), Munster (six times) and now Connacht (twice), in his year moving from Ulster to Munster he also played for Ballynahinch and UL Bohs.

“So that was messy,” he admits.

Hence, Clontarf are his fourth club, and while he’s also played for the Ireland Club XV against their French counterparts in the Aviva Stadium, Sunday’s final is the product of a longer, harder journey.

“I think people sometimes don’t understand or appreciate the commitment that goes into something like this. We started pre-season back in July and it goes all the way through now to the beginning of May.”

“It’s a long season doing two or three gym sessions a week, two pitch sessions, sacrificing your Saturday most weeks. Throw in Leinster League games, it’s a lot of rugby. And sometimes I don’t think people realise how much of a commitment it is. We say no to a lot of things on a social level, friends and family. A lot of sacrifices, but it’s worth it for these days.”