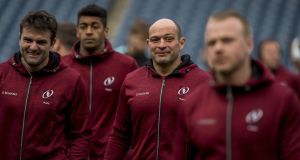 This intriguing first play-off meeting between them is firm proof of the strides made by both provinces under new head coaches yet at face value it seems as if Ulster are under altogether more pressure to win, whereas it appears something of a free hit for Connacht.

Compared to last season, Ulster have gone further in both competitions, earning quarter-finals in each. Ulster died with their boots against Leinster in the Heineken Champions Cup quarter-finals, but there would be an expectancy on them to overcome Connacht, and failure to do so would be an anticlimax.

“I think we can separate the two things out there,” says McFarland, ever the voice of reason. “We can look back with satisfaction on what we’ve achieved thus far in terms of qualifying second and winning 13 games.

“We haven’t played the best rugby we’re capable of all season, but on occasions we have. However, when it comes to the play-offs it’s a totally different. We’re playing a team who we’ve lost to twice already this year.

“They’re confident. We know they’re confident from the way they talk about it. They know they can win up at the Kingspan, and it really is on us to play better than we did on the previous two occasions to try and beat them.”

While Ulster are missing Jacob Stockdale’s undoubted X factor and Marty Moore’s scrummaging, this is offset by Rory Best’s return for what will be an emotionally charged home farewell for their hugely popular captain, as well as Darren Cave, in front of an expected crowd of around 15,500. Between them, they have made a combined total of 446 appearances for Ulster.

As to whether the players will draw on this, McFarland ventured: “That could easily be the perspective from the outside, but professional rugby is a different world to what it was 15, even ten years ago. Now there’s so little room for expending mental energy or emotional energy in the week on anything other than preparation for the game.

“Those kind of things sit there unspoken. Everybody knows it, but it’s certainly not anything we’ll bring up as a motivating factor because having a quarter-final at home, in front of our fans, against another Irish province with a prize of a semi-final [away to Glasgow] that’s plenty of motivation in and of itself.”

Nevertheless, Ruan Pienaar’s enforced departure certainly heightened Ulster’s focus in his farewell win over Leinster two seasons ago, albeit Johann Muller’s goodbye clearly made home team and crowd overaroused against Leinster in 2014 when Tom Court, who was also moving on, was sent off in the 17th minute for a dangerous tackle on Devin Toner in a 22-20 defeat.

Aside from the evident confidence generated by this season’s double over Ulster, and their form of late, enough of this Connacht squad were part of their 2016 triumph for that to also imbue them with belief.

“This is a massive game for us. Knock-out rugby with the added incentive of an interpro,” said Andy Friend. “I genuinely feel that we haven’t played our best rugby yet and we are constantly improving”.

“Ulster are an outstanding side. They have got better and better and we are facing a much stronger side that what we played earlier in the season. Facing them on their home patch makes the challenge even greater but we are really up for that challenge.”

Interestingly, Friend has gone with Kieran Marmion and Stephen Fitzgerald, with Caolin Blade and Darragh Leader to spring from the bench.

With home advantage, revenge and the Best/Cave factor, Ulster are rightly six-point favourites, but the sides do look fairly evenly matched. Connacht could have the edge at scrum time.

The back-row battle will be immense, and if at their best, Iain Henderson and Marcell Coetzee may give their ball-carrying more oomph, but Ultan Dillane and Jarrad Butler arrive in good form too, and with the carrying and offloading of Bundee Aki and Tom Farrell, Connacht look every bit as powerful and inventive in midfield and out wide.

Both Billy Burns and Jack Carty also possess particularly inventive kicking games and although it’s a bit nippy for summertime, conditions should suit both sides’ willingness to play at a high tempo and have a go. It’s liable to be seriously entertaining.