Trip to warm South Africa a timely break for Connacht 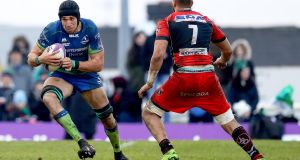 Ultan Dillane: back to aid Connacht in the Pro14 clash with the Cheetahs in Bloemfontein. Photograph: Tommy Dickson/Inpho

Connacht are enjoying warmer climes this week on their first Pro14 visit to South Africa for Saturday’s joust with the Cheetahs in Bloemfontein.

Having arrived in South Africa on Monday, the Connacht squad enjoyed a first training session yesterday in 30 degrees Celsius, acclimatising to the high altitude of the Highveld.

Coach Kieran Keane says it is a new environment for most of the players, who flew business class with Emirates through Dubai, while management was relegated to economy class.

“The boys travelled well, and being on tour like this has plenty of positives for a group. They have reacted really well and are just getting on with the job.”

The mood was certainly helped by Connacht’s 22-19 win over Benetton on Saturday – their first Pro14 victory on the road this season – and with no fresh injuries reported, Keane says morale is high.

“After reviewing the game, it was obvious there are still plenty of work-ons. But the lads know that, and they knew it at half-time in the game and came out in the second half, really dug in and scored three tries. So there was plenty of positives to take from it as well.

“Thankfully we came through the game unscathed from an injury point of view, and the 25 we brought to Italy have travelled on to Bloemfontein. It includes Ultan Dillane and it will be great to have him available for the game against Cheetahs.

“The win at Treviso also lifts the morale within the group and that is really important when you are touring. It gives us a bit of momentum this week.”

Keane says it is valuable to have “the full undivided attention of the players for this training week”.

“We need that leading into the Cheetahs game because they are a tough team. I think everyone is familiar with their style of play. They play some really exciting and attacking rugby. They played like that when they came to the Sportsground and they were hard to beat. They are even harder to beat when they are playing at home, and only one team [Glasgow] has managed it since they joined the PRO14.

“So, it’s a massive challenge, but one we are really relishing. We won’t be making any excuses about temperatures or adapting to altitude or anything like that. We will be focusing on our game plan and what we can control and hopefully delivering a winning performance on Saturday.”

Captain John Muldoon says that by Saturday game time the players should be well adjusted.

“The game will be kicking off at 7.35pm in the evening South African time so hopefully heat won’t be as big of a factor as during the day. There is no doubt the Cheetahs are a very good attacking side so we don’t want to give them huge opportunities to run the ball. If we fall into that trap, we will be in big trouble regardless of other factors.”

Connacht use visit of Benetton to give as many players as possible match time 20:51
Celtic surrender two goal lead in AC Milan defeat 20:16
Fans told not to excessively sing or hug as Premier League crowds return 20:02
Gillane’s chances of playing against Waterford rated ‘50-50’ 19:20
Aaron Gillane an injury doubt for the All-Ireland final 19:13
Here is your handy guide to sport on television this week