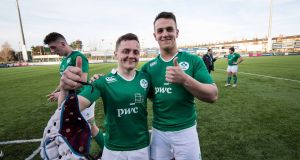 James Hume with Michael Lowry after their under-19 friendly match against Japan last March. Photograph: Inpho

Ireland coach Noel McNamara has made three changes from the side that beat Italy 38-34 for the Under-20 Six Nations Championship match against Wales on Friday night.

The highly-regarded Banbridge and Ulster centre James Hume makes his debut at outside centre with captain Tommy O’Brien switching to the right wing. Ronan Kelleher, a late withdrawal the last day, has recovered from illness and resumes at hooker, while Johnny Stewart reclaims the number nine jersey, having missed the Italian game while on Ulster duty in the Pro14.

Their opponents Wales make 10 changes from the side that was well beaten by England with only Cai Evans, outside centre Callum Carson, scrumhalf Harri Morgan, hooker Iestyn Harris, captain and blindside Tommy Reffell and number eight Taine Basham retained in the starting line-up from the last outing.

In the two matches to date the Welsh have given debuts to 24 players as they build towards the Under-20 World Championship in the summer. The visitors have won the last five meetings between the countries in the tournament.

McNamara will be looking for an improved performance in defence from his charges and that they play through the 80 minutes to complement the obvious attacking edge that the team possesses, manifest in players like O’Brien, wing James McCarthy and fullback Michael Silvester.

To provide a platform Ireland will need to be rock solid in the setpiece and look to halfbacks Johnny Stewart and Harry Byrne to provide control and direction.

Level 5 golf shutdown: Ireland one of few countries to close courses 16:00
The biggest game in their history? Ireland women v Ukraine - all you need to know 13:06
Dan Leavy could make Leinster return against Zebre 12:47
Tennis clubs in Republic of Ireland to close under Level 5 Covid-19 restrictions 12:02
Pep Guardiola laments Man City’s injury woes 10:26
Crossword Get access to over 6,000 interactive crosswords