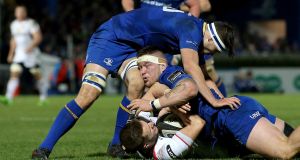 The RDS will stage a quasi reunion on Saturday evening but there’ll be no balloons, bunting or buffet, none of the traditional trappings of conviviality.

It is an occasion marked by circumstance rather than celebration as erstwhile teammates will stand in opposition when Leinster host Ulster in a Guinness Pro14 match.

On June 25th, 2016 Ireland lost 45-21 to England in the final of the Under-20 World Junior Championship (JWC) final at the AJ Bell stadium in Manchester.

Two and a half years on from that achievement there is a possibility that 10 of Nigel Carolan’s Ireland side will be in action at the RDS. It could even be 11 if Leinster’s Vakh Abdaladze lines out tomorrow. The tighthead prop didn’t play in the final but did in the win over New Zealand.

Ryan captained that Irish U-20s side, leading the way brilliantly in a campaign that included an historic victory over New Zealand en route to the final and represents a high point in achievement from an Irish perspective at that particular age level. Stockdale was an outstanding, try-scoring presence at fullback, his highlights’ reel in the tournament liberally sprinkled with moments of rugby acuity.

Word emanating from Belfast is that Ulster coach Dan McFarland will dispatch a young side to test their mettle in the backyard of the European and Pro14 champions. Included in that number will be three players from the aforementioned Irish U-20 team, flanker-cum-number eight Greg Jones, hooker Adam McBurney and outhalf Johnny McPhillips.

Former St Andrew’s College schoolboy Jones (22), who completed his studies at UCD, before accepting a place in the Ulster academy, scored Ireland’s first try in the victory over the ‘Baby Blacks.’ Playing All Ireland League rugby with Ballynahinch, he was a member of the Ulster A team in the Celtic Cup tournament and has racked up four appearances for the senior team this season to date.

A good athlete with a huge work-rate and a lineout presence, he is a noted tackler and it’ll be interesting to benchmark his progress on Saturday evening.

McPhillips (21), born to Irish parents in Newcastle, was educated at Sedbergh where he played fullback. He moved to Ulster in 2015 to join the academy and study at Queen’s University.

In the absence of the injured Bill Johnston, he was first-choice outhalf in the 2016 Under-20 Six Nations and following the Munster player’s shoulder injury in the New Zealand match in the JWC, he was excellent in propelling Ireland to the final. He’s been a little unfortunate with injury since. This season he’s played eight matches for Ulster, starting just one.

Adam McBurney (22), a tough, combative presence, who relishes physical confrontation, scored tries against New Zealand and England in the Manchester tournament. The Ballymena hooker has yet to start for Ulster this season but has appeared from the bench on eight occasions.

Both Jones and McBurney will be well known to Leinster scrum coach John Fogarty, who fulfilled the same role with the Ireland U-20s in 2016.

The 22-year-old Conor O’Brien was another standout player in Carolan’s side and the third-year academy centre made his senior debut for Leinster last season and has followed up with a further six appearances in the current campaign, scoring three tries to boot.

Hugo Keenan (22) enjoyed a fine JWC on Ireland’s left wing and while he only managed a single Leinster senior appearance in each of 2016 and 2017, he has been a mainstay and hugely influential performer in the Ireland Sevens team and a central figure in all the success they’ve enjoyed over the past couple of years.

The Mount Merrion native has started three matches at fullback for Leinster this season, scoring a try against the Dragons. Andrew Porter, another Grand Slam winner with Ireland, made his Leinster debut in 2016 and is fast approaching the half century of caps with 42 appearances.

A little over a week shy of his 23rd birthday, he played loosehead prop with the Irish 20s, but has since converted to tighthead, demonstrating a remarkable aptitude in making the switch in such a short period of time.

Max Deegan (22) was voted the Under-20 World Player of the Year for his performances in the 2016 JWC, a fitting accolade for the number eight, who enjoyed an outstanding tournament manifest in two man-of-the-match awards and tries against New Zealand, Argentina and England.

A brilliant athlete, he boasts an impressive try haul of eight in 31 Leinster caps, the latest of which came against Munster last weekend in Thomond Park. The final member of the class of 2016 is former Newbridge College and current UCD student Jimmy O’Brien (22), who came on as a replacement for his namesake Conor, in the final.

He spent a couple of seasons with the Ireland Sevens set-up before making his senior Leinster debut as a replacement against the Ospreys in November and then celebrated his first start, at outside centre against the Dragons, with a brace of tries. O’Brien can play outhalf and both centre positions, given his distribution skills and balance as a runner.

Irrespective of what match-day 23s McFarland and his counterpart Leinster head coach Leo Cullen eventually opt for, the presence of half a dozen or more of the former U-20s squad will make for an interesting aside to the match.

It won’t be the first time that the 10, 11 or part thereof have collided on a pitch since that day in June 2016 but for Irish rugby it perhaps reinforces the value of having a strong presence in development and competitive terms at Under-20 international level.