Munster get down and dirty to maintain winning start 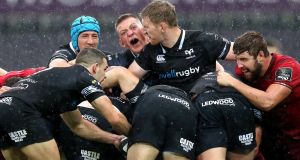 Munster’s forwards stood up to be counted as they helped deliver a third straight Guinness Pro14 victory with this 21-16 win over the Ospreys. Tries from Jean Kleyn and Darren Sweetnam - plus three penalties and a conversion from captain Tyler Bleyendaal - saw Rassie Erasmus’ men come out on top.

The Ospreys stayed in the game through 11 points from the boot of Sam Davies and James Hook’s first-half try, but Munster were deserved winners.

Munster dominated the early stages, Bleyendaal putting two penalty efforts wide before succeeding at the third attempt. Erasmus’ side still fell behind to Hook’s sublime solo effort, Davies converting. But the try failed to hide the fact Munster were the better side, though, and there was time before the break for them to take back control.

Kleyn was driven over from close range and a clean line break from Chris Farrell saw the ball recycled for Sweetnam to score in the corner. Bleyendaal converted the first of those efforts to send his team into the break 15-7 to the good.

Munster’s scrum superiority and breakdown work would have impressed watching Ireland forwards’ coach Simon Easterby, but the second half was far from a classic. Driving rain didn’t help the game’s flow, but it did suit Munster’s powerful forward pack the better of the two sides.

Davies and Bleyendaal exchanged penalties, and two more kicks from the young Wales pivot set up a nerve-jangling finish.

Munster should have been further clear, but with the game in the balance they reverted to their traditional strengths. Keeping the ball in the tight exchanges paid dividends and Bleyendaal’s third penalty put the final nail in the Ospreys’ coffin.