Erasmus insists it’s steady as she goes with Munster 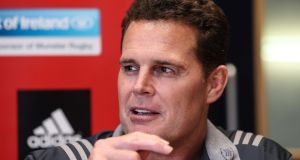 Rassie Erasmus: “There’s nothing else I currently have to do in South Africa at this stage so it’s not like I’ve got my head split in two places.” Photograph: Billy Stickland/Inpho

Munster coach Rassie Erasmus said he does not believe his impending departure will have any impact on players or performances prior to his departure or later in the season when his successor takes over.

And he said he has no immediate plans to depart and that there is ongoing dialogue with Munster and the IRFU to ensure a smooth handover.

“My children are back in school and we plan as if it can be another five, six months, until Munster is okay, that’s the agreement when I made that decision, when I spoke in June to David [Nucifora] and Garrett [Fitzgerald]. Otherwise I would have sent the children back and into school, because otherwise I’d be asking that question myself every week.

“I’m not 100 per cent sure how long it will take, whether it will take longer or maybe something shorter but I really made the conscious decision not to worry about that and let it even slip my mind here and there because then you get sidetracked and then you play a bloody important game like this weekend and you’re thinking about stuff like that. So, no, I don’t have an idea.”

Erasmus is confident that the handover will be smooth and amicable and his primary concern now is concentrating on performances and building on the opening bonus point win over Benetton Rugby.

“If it was a club where you went away with a sour taste in your mouth or worse, if there was a reason why you’re leaving because something was happening in the club, I think you might lose focus.

“But the club has done too much for me and I’ve went through too much in the 14 or 15 months with this club that I’m actually overcautious not to be too focused. I would rather watch them next year play in those finals and think ‘I was part of that’.

“There’s nothing else I currently have to do in South Africa at this stage so it’s not like I’ve got my head split in two places at this stage.”

Erasmus said players have dealt with the announcement of his departure well and that it’s not an issue in the changing room.

“It might be for some and it might not be for others but I think if it’s a mutual respect thing where it’s not just respect for a coach because he’s the coach or the director of rugby.

“Hopefully he’s got the respect for you more than just because you’ve got a leadership role or vice versa with me, if I only respect a player because he’s a good player then I’m not really a good person.

“So, I’m sure here and there people will in the next few months think on those lines, I’m not sure but I think the bulk of us are nicely in line. And I know the players can see we’re working with a plan to make sure that however this happens, it happens in the best possible way. Because everybody loves Munster, nobody’s trying to nail Munster and that’s why I think it’s easy to do – not easy but easier to do.”

Meanwhile, a scan is expected to confirm that promising centre Dan Goggin faces a lengthy spell on the sideline after picking up a serious knee injury in the 34-3 win on Friday night, while Erasmus is hopeful that he will have some of his internationals back for the clash with his former club the Cheetahs at Thomond Park on Saturday.