Ulster aim to combine physicality and accuracy against Leinster 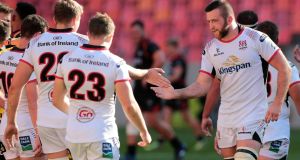 Ulster’s Alan O’Connor is available to face Leinster at the RDS. Photograph: Inpho

When it comes to grim away records, Ulster cannot hide from the fact that making a trip to Dublin has consistently meant for them in both regulation season and knockout rugby encounters.

The northern province have managed to taste victory just the once at Leinster since 1999 – and that unusual occurrence came in March 2013 when they hung on to win 22-18 – so, now, facing an outing at the RDS off the back of a defeat to Connacht has a fairly forbidding look to it.

Factor in that Leinster are also arriving at this third and final festive interprovincial after their loss at Munster and, before that, a close call when winning at home to Connacht, and Dan McFarland’s side could well be facing another of those difficult days in south Dublin.

Though McFarland’s selection plans appear to hint towards some further rotation of his resources, the Ulster head coach does have lock Alan O’Connor, and props Andy Warwick and Wiehahn Herbst – the latter not having featured since the end of September due to a groin issue – available for this final hit-out before next week’s crucial Champions Cup game with Racing 92 in Belfast.

O’Connor’s availability does at least allow Ulster another option at second row with Kieran Treadwell and Ian Nagle having been the only recognised locks who have been fit since Iain Henderson dropped after the back-to-back European wins over the Scarlets.

With Marcell Coetzee going through return to play protocols, following his departure for an HIA in Galway, Ulster may yet travel quite light to the RDS in terms of being able to unleash the South African’s explosive ball-carrying presence and ability at winning turnovers.

Definitely out is prop Tommy O’Hagan whose debut off the bench against Connacht ended with an ankle injury while Craig Gilroy (back) is also thought to not yet be ready for a return.

Johnny McPhillips looks set to get another start despite a tricky evening at the Galway Sportsground with Billy Burns again looking likely to be rested.

Though Ulster have now lost both this season’s interpros to Connacht – the first time this has happened in the league – of rather more concern to McFarland, come Saturday, will be avoiding any repeat of the record 64-7 tanking Ulster took at the end of September at Thomond Park.

And in order to put it up to Leinster – the visitors may have a contingent of Leinster natives in their ranks which should add extra motivation – the northern province has made it clear they intend to start with a what they hope is an irresistible combination of physicality and accuracy.

“There is no more difficult place to go than the RDS,” said assistant coach Jared Payne who was part of the victorious Ulster side back in 2013 but shipped a yellow card in the last minute rear-guard. “You just have to go down and get into them. Go down and don’t cross the line in terms of doing anything silly, you have to front up physically and also look forward to the challenge.”

As defence coach, a big win for Leinster is going to make particularly painful viewing, though, again, Payne makes it clear that Ulster have to rattle Leinster by coming out of the blocks with venom.

“It’s key to a successful performance so we’ll be aiming to hopefully start well because I think if we don’t, they’re a quality outfit Leinster and they really will put us to the sword.”

And alluding to the possibility that Ulster will be blooding some young players in Dublin he added: “You got to manage the team during the period, so there will be a few changes and a few good opportunities for guys. I can’t wait to see them take it with both hands.”