As dust settles on Ireland’s collapse in Japan, Johnny Sexton set to line up against Lyon 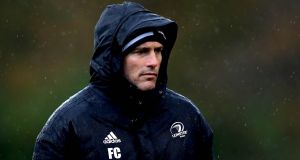 Leinster’s international contingent have returned to base. Leader among them Johnny Sexton will speak at the Champions Cup launch in Cardiff this Wednesday, with the 34-year-old cautiously framed to don blue in Lyon on November 23rd.

“He immediately looks for another challenge,” said Leinster assistant coach Felipe Contepomi. “His challenge will be next week [round one against Treviso in Dublin] or the following week [against Lyon], and that’s the way he is.”

Despite the dust still swirling around Ireland’s World Cup collapse, rugby’s unending season continues this weekend with interprovincial duels in Galway and Limerick. There is no time to truly rest as Leinster enter an 11-game run, having just come off a five-match winning streak, so every able body will be needed as soon as possible.

Sean Cronin (neck) and Jack Conan (foot) will not be among the cavalry.

“Most of them are starting to train this week,” Contepomi revealed ahead of the Connacht match at the Sportsground on Friday night. “We have a short week this week and that doesn’t help in terms of integration.”

The players returned from Japan will feature against Treviso, the rest against Lyon before back-to-back meetings with Northampton rapidly arriving on December 7th and 14th.

We train to stay level-headed in chaos. I think it has been hugely effective for us because there are times in games when things don’t go according to plan

“We want them at their best,” Contepomi explained. “If it is this week, next week or two weeks’ time. We don’t want to just have them because of the sake of having them. It is about preparing them physically first, mentally and in terms of our way of playing the best we can so we can set them up to really be successful.”

This signals an immediate turn away from what Isa Nacewa branded as the “conservative” approach that led to Joe Schmidt’s Ireland suffering a massive downturn in fortunes this year. When Contepomi mentions “our way of playing” he alludes to the unstructured style Stuart Lancaster has cajoled from Leinster players en route to two European finals.

“I think it is great because so much of the game isn’t structured,” said Joe Tomane, the Wallabies centre who has shaken off three years of surgical interruptions to clock up 276 minutes for Leinster in four games this season. “We obviously train that way. We train to stay level-headed in chaos. I think it has been hugely effective for us because there are times in games when things don’t go according to plan. We got to stay laser-focused on what we need to do and stay focused on the process and let the results handle themselves.

“It has been great. It has helped me grow as a person and as a player. I only made the switch to the centres for three years now and I feel like I have grown a lot under Stu.”

The wonder about Lancaster’s methodology is whether it’s highly technical or skill-based coaching.

“It is more rounded,” Tomane explained. “He covers pretty much everything but primarily his focus is on skills under pressure.”

The very skills under pressure that were sorely absent from Irish players against New Zealand in the World Cup quarter-final and Englishmen against South Africa in last Saturday’s final.

For me, I can say, in general, as a spectator, Ireland is a very solid team with very good players

“Yeah, but [England] did the same to the All Blacks the week before,” Tomane noted. “I think that’s why Stu harps on that our skills under pressure are good.”

Contepomi – a veteran of four World Cups – was the master of producing under the severest pressure imaginable.

“It is one thing watching it from outside; it is another to be on the inside. It is very hard for me to give an opinion on what went wrong or what didn’t happen or what I would like to be different in the Irish set-up when I am not there. I don’t know how they train. For me, I can say, in general, as a spectator, Ireland is a very solid team with very good players.

“Sometimes you have good games, sometimes bad games. The All Blacks were the favourites and suddenly, with one bad game where they couldn’t impose themselves, they were vulnerable.”