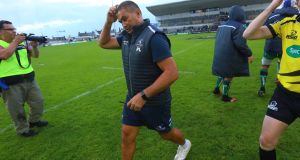 Pat Lam has conceded his Connacht side were short on match fitness ahead of their opening day defeat to Glasgow. Photograph: Inpho

Pat Lam is promising his under-cooked Connacht will be turning up the heat when they host second-round Pro 12 visitors Ospreys on Saturday, despite a deepening injury crisis.

The Connacht head coach says the squad is “hurting” from its surprise walloping by Glasgow after a “shocking” performance that was not up to Connacht’s standards.

“Talking about it afterwards, they [PLAYERS]all feel better for having that game under their belt. When you look at the end of last year to where we are, we are a bit under done. It was the concern I had because a lot of players hadn’t played 80 minutes.

“All our supporters said fantastic, great last year. We didn’t get carried away, we went through the process. Now everyone is telling us it was a shocking performance, which it was, but we are not getting carried away by that either.

“There were moments in the game when we were really good, but unfortunately too many moments that we weren’t, and that’s part of the process.

“The reality is, it was just five points on offer, that’s all it was and we got none. Last year we lost five games and in two of those, we got no points, so that’s one down, out of the way now.

“We spent five and a half minutes in defence in our own half by kicking the ball and not chasing it well, that’s where we lost the game, and that’s the hunger. That is an area where we have to improve, and we will, because there is a bit of pain going on at the moment.”

However Lam is facing yet another hit on his squad at the wrong time, with injuries to midfield and the back row.

Last weekend’s replacement James Connolly is expected to slot in if Fox-Matamua is ruled out, while newly-promoted Academy player Rory Maloney is also “fit and available”.

Lam says it is a case of last man standing again.

“It’s his [RORY MALONEY]first time as a pro this year, so he’s been training through pre season. He’s another player who has come off a long term injury, having come back in the back part of the season for the Eagles and club rugby, but he is fit and available - possibly a good opportunity for him as well.”

Midfield options are also limited with Peter Robb following return to play protocols for a head knock last weekend, and Rory Parata, who made 18 appearances last season, sidelined for a month after injuring his knee in a club game. Fullback Cian Kelleher suffered a hip strain, scrumhalf Caolan Blade has a quad haematoma, and, up front, prop Denis Buckley is also following concussion guidelines.

1 Gordon D'Arcy: Ireland must go after victory by frightening France into mistakes
2 Robbie Henshaw likely to be the only Irish change for France finale
3 Seán Moran: Will a silent, empty Hill help to loosen Dublin’s grip on Sam?
4 Cian Healy: ‘Realistically I got away with murder when I was younger’
5 Warren Gatland: England players could miss Lions tour if not released for Japan warm-up
Real news has value SUBSCRIBE