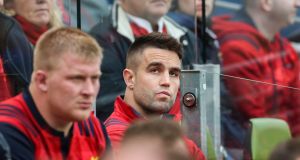 Munster coach Rassie Erasmus thinks there is a chance that Conor Murray could be fit enough to feature against Connacht this Saturday, but he doesn’t want him to be in a rush to prove his fitness ahead of the Lions tour and their Pro12 semi-final.

After sitting out Munster’s last six games because of the injury, Murray (28) is nearing a return, according to Erasmus and he is hopeful he could feature at Thomond Park against Pat Lam’s side.

Murray’s progress has been slower than expected since he sustained nerve damage to his shoulder/neck against Wales in the Six Nations.

The Limerick scrumhalf had previously sustained shoulder/neck injuries in January this year against Glasgow, while he also missed two European games in 2015 with a similar problem.

But with Lions coach Warren Gatland insisting he has to prove his fitness to make the trip, the pressure is on Murray to play for Munster before the end of the season.

‘You can’t be stupid’

“I think maybe Conor is conscious of that, but he hasn’t been saying anything along those lines. I think it would be normal if he felt that way, it only comes around every four years but also you can’t be stupid,” said Erasmus.

“After this Lions series his rugby career is not over, you know, he’s got another few years to go. So, obviously that plays a role, but that won’t rush him back.

“If we didn’t rush him back for the Champions Cup semi-final in Ireland why would we now rush him back all of a sudden? I’m sure there will be other Lions players who will still get injured before the tour.

“Every week he contributes more in training sessions and he is doing more and more and more. And he has been ticking all the boxes – much slower than we hoped to – but he is ticking the boxes.

Munster secured a home semi-final in the Pro12 with victory over Treviso last weekend, but that win has come at a considerable cost. Top try-scorer Ronan O’Mahony will miss the rest of the season with a broken leg, while forward Dave O’Callaghan also appears to have a serious knee injury to contend with.

Jean Deysel (ribs) and Billy Holland (tonsillitis) are both expected to be fit to return to fitness, although Robin Copeland will miss the rest of the season after surgery on a dislocated shoulder.

It remains to be seen if Murray is named in the matchday 23 this weekend, but Erasmus hinted it may be safer to start him rather than put him on the bench, as he tries to strike the perfect balance.

“We must just be careful to put a guy on the bench if you get an injury in the first 10 or 15 minutes and a guy has to play 70 minutes. We’ll have to really think about it,” he said.

“Look, we’ve qualified for a home semi-final, which is important, not just for us but for the supporters to give them something back for their great support they have given us so far. But then you play Connacht, you play last year’s champions.

“Although you don’t want to lose this game you also want to manage players and get players some match fitness and maybe some players who are close to selection, give them some game time and then also gel the team.

“It is going to be tough decisions, but more tough in the sense that you try and get guys fit for that important semi-final. Then you don’t want to go and lose to Connacht which is obviously a pride thing. It’s an interesting week to manage.”

Meanwhile, there was positive news on Mike Sherry, who has made real progress in recent weeks from his back problem. There were fears that he might never play again, so serious was the injury, but things are looking up for the hooker.

“He is improving, he is actually improving. There was a time when it really stood still a little bit with his injury, but last week I saw the injury report and there is definitely an improvement, which is great. I think he stood still for a few weeks/months, but there is improvement.

“I think he will [play again], definitely not this season, but it is such a long time since the last game, you have until the next pre-season match and the whole pre-season and everything. Three months is a long time in rugby.”